Born in 1970, Adam Pierończyk began playing the saxophone at the age of 18 and four years later became a student at the Essen Academy of Music. The beginnings of his musical career are connected with the German scene. It was there that his first band Temathe was founded. After returning to Poland in 1994, Pierończyk quickly became one of the most active and sought-after musicians of the young generation.

In 1996, he was invited by Leszek Możdżer to record the album "Talk To Jesus," and later he formed a duo with him that made a name for itself in the history of Polish jazz not only with a series of concerts that were excellently received by the audience, but also with the concert albums "19-9-1999" and "Live In Sofia," which were appreciated by professionals and were named the best jazz album of the year by the magazine "Jazz Forum."

He made his debut as a bandleader in 1997 with the album "Few Minutes In Space", in the recording of which his idol from his youth, Zbigniew Namysłowski, participated as a guest.

His position was strengthened by the successive albums he recorded. In 2001, the album "Digivooco" was released, a deep bow to electronics, recorded with a special guest, saxophonist Gary Thomas. It was followed by "Amusos", which featured for the first time a black singer from Benin, Mina Agassi, and in the following years albums released by another German label, Meta Records - "Busem po São Paulo" and its concert version "Live In Berlin".

In 2010 Pierończyk changed publishing colors again and signed a contract with the Berlin label Jazzwerkstatt. His first album was "El Buscador", which he recorded together with the famous double bass player Anthony Cox. It is Pierończyk's most ethnic album to date and was nominated for the 2011 Fryderyk Prize.

His next album, "KOMEDA - The Incocent Sorcerer", was particularly well received and was exceptional in several respects. For the first time, the musician resorted to compositions that were not from his own pen, and additionally interpreted them by dispensing with the piano. A risky procedure that was crowned with complete success. "KOMEDA" was hailed as the best comedy album since Tomasz Stańko's " Litania" and its author as a visionary. This recognition is all the more valuable because it was also expressed by American critics from the magazine "PopMatters" and the world's most famous jazz portal "All About Jazz". In Poland, the album received five Fryderyk nominations and won in two categories, namely for the best jazz album of the year and for the jazz musician of the year.

Pierończyk's recent collaboration with Miroslav Vitous, the world-famous Czech double bassist who has played with Miles Davis, Wayne Shorter and Jo Zawinul, among others, proved particularly fruitful. Their first album together, "Wings," was nominated for the 2016 Fryderyk Awards in the "Album of the Year - Jazz Music" category, while Pierończyk himself was nominated in the "New Artist of the Year" category. The duo's second album, "Ad-lib Orbits," released on the Austrian label PAO Records, contains 16 improvised pieces composed by the two musicians and recorded in a studio by Vitous. 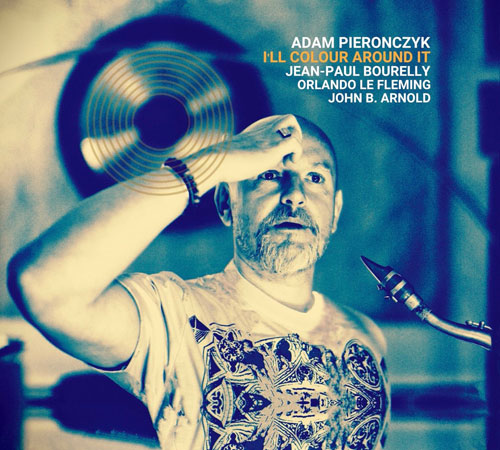 Adam Pieronczyk - ILL Colour Around It

A new quartet by Polish saxophonist Adam Pieronczyk. A premiere band composed of stars of the American jazz scene. Saxophone, guitar, bass and drums are a lineup that offers a lot of freedom and allows the musicians to spread their wings.

Adam Pierończyk, leading Polish saxophonist and one of the most important and creative musicians on the jazz scene in Europe today, composer and leader.

Author of 25 albums. He is considered one of the "greatest innovators in Polish jazz" and performs regularly all over the world. He became the best soprano saxophonist at Jazz Forum magazine for the 16th time.

Jean-Paul Bourelly is one of the most original and innovative musicians in America. He is a versatile guitarist and vocalist with Haitian roots. At the age of 18, he moved from his hometown of Chicago to New York, where his extraordinary talent attracted the interest of Elvin Jones, Muhal Richard Abrams, Pharaoh Sanders, Archie Shepp, Cassandra Wilson, Olu Dara and Miles Davis, among others.

Orlando le Fleming is one of New York's most frequently invited and trusted double bassists, whose playing can be admired in many important bands. He has been appreciated by Branford Marsalis, George Coleman, Dave Liebman, Joey Calderazzo, Kurt Rosenwinkel, Lage Lund and many others.

A native of New York, John B. Arnold is not only the grandson of world-famous jazz standards writer Hoagy Carmichael (Stardust, Skylark, The Nearness of You), but above all, he is a fascinating and energetic drummer who continues to develop his musical language. He has collaborated with artists such as Chet Baker, Lee Konitz, Kenny Garrett, Greg Osby, John Abercrombie, Matthew Garrison, John Pattitucci, Reggie Washington - and recently teamed up with Adam Pierończyk for the album "Migratory Poets".