Arthur Possing is a young Luxembourgish pianist. Born in 1996, he grew up in a family, where music takes an important role and was omnipresent at home.

He started classical percussion at the age of 6 and classical piano at the age of 10, later in the class of well-known pianist Jean Muller. In 2009, he began jazz piano with Marc Mangen and in 2011, vibraphone with Guy Cabay.

In 2016, after finishing secondary school, he began further studies in jazz piano at the Conservatoire Royal de Bruxelles with Eric Legnini.

The Arthur Possing Quartet was formed in 2013. The members of the group met in highschool (music section) and soon they started to play together regularly.

The musicians are originally from Germany, France and Luxembourg and have studied at the Royal Conservatory of Brussels, at the Centre des Musiques Didier Lockwood near Paris, and at the Musikhochschule Mannheim.

Their repertoire consists of own compositions, as well as tunes of jazzmen they really appreciate.
The quartet plays modern jazz, with influences from all genres, without forgetting the tradition.
In 2017, the quartet recorded its first album, entitled “Four Years” which has been released in March 2018 on the Belgian label Hypnote Records. It was well acclaimed by the audience and the press and won “Hit” by Couleurs Jazz in France.

"Natural Flow" (2021) is the second album of the Arthur Possing Quartet, released on Double Moon Records. On this new album, which follows the debut album "Four Years", the band explores numerous innovative and explored compositions and sounds that give the album its own special character. For this album, the quartet has brought on board the French trumpeter Thomas Mayade (Brussels Jazz Orchestra, David Linx, Electro Deluxe ...), who gives the band a special and unique color. The band recorded the album at Peter Gabriel's famous Real World Studios in Box (UK), which are among the best sounding and most praised studios in the world. They house a number of the best audio equipment ever made. 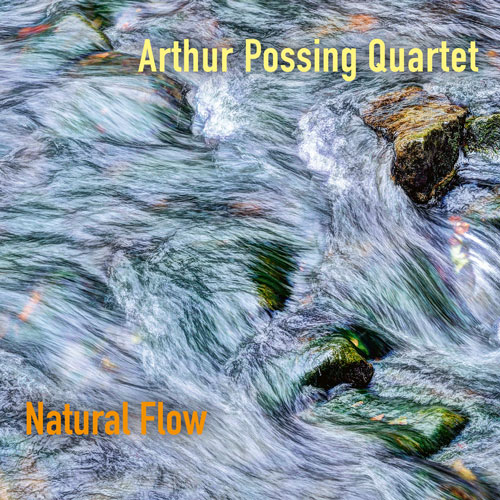 “Natural Flow” is the name of the second album by Luxembourgian pianist Arthur Possing with his quartet, and the album title of course also defines the sound ideal of the band. It has existed since 2013, so it had enough time to develop the natural flow that characterizes the eleven songs on the successor to “Four Years”. Together with his compatriot Niels Engel on drums, the German bassist Sebastian Flach and the French saxophonist Pierre Cocq-Amann, Possing plays a warm modern jazz on “Natural Flow”, which is sophisticated, versatile and exciting. The four got to know each other in the Luxembourg jazz scene, and the French trumpeter and flugelhorn player Thomas Mayade is also a guest on four songs.

“Together, we embody exactly the sound I imagined,” Possing said. “As a pianist, the standard formation is the trio, but I always wanted a saxophone to play the melodies. I realized when composing that it would be better if another instrument played the melodies.”

"Golden Fields” is also among the particularly impressive songs. “That was one of the first pieces I composed for the album,” Possing remembers. “The influence of Brad Mehldau can be heard quite clearly there. I composed the piece after I saw a concert by him with his trio in Luxembourg. He embodies an aesthetic that is very close to me and that I find very important – without wanting to compare myself to him now.”