Badi Assad is a Brazilian singer, guitarist and composer.

Based in São Paulo, Brazil, virtuoso guitar player, singer, vocal juggler and songwriter, Badi Assad has emerged as one of the most versatile artists of her generation. With more than 14 albums released worldwide and more then 40 visited countries, her 2006 CD Wonderland was selected among the 100 Best from the prestigious BBC London and was also included among the 30 Best on Amazon.com. The US magazine, Guitar Player, selected her from a pool of artists (that included the likes of Ben Harper and Ani DiFranco), as one of the guitar players that would revolutionize the world.

Embraced by record companies such as Verve (Universal) and eDGe Music (Deutsche Grammophon), she has played an array of international concerts over the past two decades, including innovative collaborations with Bobby McFerrin, Yo-Yo-Ma and David Broza, among others. She has performed in some of the most prestigious International Festivals, including North Sea Jazz (NE), Jarazum Jazz (KOR) and in theaters such as L’Opera de Paris (FR), Palais de Beaux-Arts (BE) and the Metropolitan Museum of Art in New York (US)...

Some of her songs have reached the Top 10 in Europe. Her hit song, Waves was featured in the soundtrack of It Runs in the Family, featuring Michael and Kirk Douglas. In 2004, with the release of Three Guitars, she toured the world with guitar legends, Larry Coryell and John Abercrombie. In 2005 she joined her brothers, parents, and nephews for the live recording of A Brazilian Songbook and DVD A Moment of Pure Love, for the Belgian label GHA. In 2007 Sofia, her first daughter was born and Badi took a time out. Still, under the effects of motherhood, she was responsible for the soundtrack for the children's play Convocadores de Estrelas, by the group Seres de Luz, lent her voice to Barulhinho Ruim, a theme song by the character Bel, created especially for the re-debut of Vila Sésamo, on TV Cultura ( BR) and alongside Naná Vasconcelos she composed the score for the documentary Children of the Amazon, by Brazilian filmmaker Denise Zmekhol.

In 2010 Badi launched, by Biscoito Fino, the DVD Badi Assad, celebrating the first 20 years of her career. In the same period, Badi was invited to be the protagonist of the contemporary Ópera das Pedras, in São Paulo, directed by Denise Milan and the North-American Lee Breuer (Mabou Mines). In July of 2011 it was created the Assad Festival to honor the work of the family as ambassadors of Brazilian Music worldwide. In the following year she went on to release Between Love and Luck, her first independent album on her own label, for which she was awarded Best Composer of The Year (APCA/BR). Her song Pega no Coco won first prize for Best World Music Song at the USA International Songwriting Competition. Rolling Stone Magazine selected her as among the 70 Best Brazilian Guitar Masters of History.

In July of 2012 Badi, with voice, guitar and kalimba, performed live the entire repertoire from her CD Verde for the 23 dancers from the Bahian Dance Company from the Municipal Theater (BTCA) at the Venice Biennale, in Italy. In January of 2014, Badi was commissioned by the Guitar Festival Marathon in New York to compose the soundtrack for the screening of the silent Chinese film, The Goddess (1934). Invited to also serve in the role of Festival Curator, she not only performed her composition live at New York’s Merkin Hall, but also received a New York Times highlight as Best of the Festival. Cantos de Casa, her first CD dedicated to children garnered Trophy Cata-Vento for Best CD of the Year.

In 2015 she was invited to work with the Chicago-based global peace-building organization, Genesis at the Crossroads as the Guitarist/Vocalist in their Saffron Caravan multicultural ensemble alongside Moroccan Vocalist Aaron Besoussan, Arab Israeli Oud Virtuoso, Haytham Safia and Venezuelan Percussionist Javier Saume Mazzei, exemplifying their work of arts diplomacy. Additionally she serves as a panelist on Genesis’ signature roundtables on the arts and conflict transformation and teaches the music and peace building program for the Genesis Academy Summer Institute, a leadership training and peace building educational program for international youth from areas of conflict.

In 2016 Hatched received acclaimed reviews for incubating a new Brazilophilic way to listen to global hits from modern icon labels including Lorde and Skrillex. In 2018 she released her first book, Around the World in 80 Artists (Pólen Livros). It was also during this year that Badi was invited to participate in the Stringshot project, recording with legendary blues guitarist Roy Rogers and virtuoso harpist and violinist Carlos Reyes.

The film BADI directed by Edu Felistoque, was nominated Best Film by The FestCine Maracanaú in Fortaleza (BR), had its international debut at Summer Brazil Summer 2018 in New York and in December won as Best Documentary at LABAFF (Los Angeles Brazilian Film Festival). In June 2020 it was selected to participate in the prestigious 'Festival du Cinéma de Paris'.

In July 2020 Badi released 2 seasons of the webseries Badi Music in her youtube channel and in October she released the album Around the World. 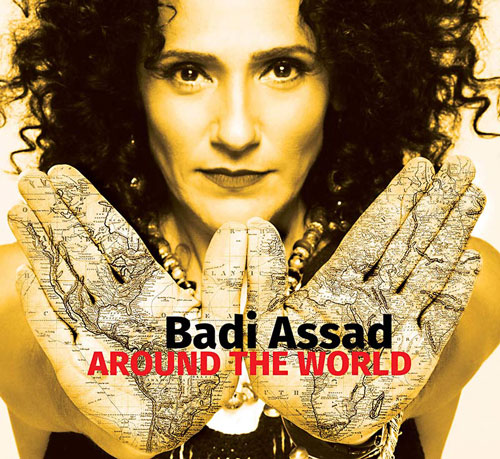 Badi Assad - Around The World

The CD Around the Worldby the singer, guitarist and composer BadiAssad brings, on her journey through the world, a repertoire based on her first book ‘Around the World in 80 Artists’. In the book Badi writes about musicians of different styles, times, and ethnicities who served as a source of inspiration during her personal and professional life. On the record, succinctly, Badi makes her adventurethrough the composers: Alt-J (England), Camila Moreno (Chile), Björk(Iceland), Lorde (New Zealand), Hozier (Ireland), in addition to the Brazilians Chico Césarand Lenine andthe Arab world represented by the beautiful Lamma Bada.

Around the World was recorded solo at Historic Studio, in Berkeley/California, by the engineer (and Bonnie Raitt’s drummer) Ricky Fataar. Only with her voice and guitar, Badi invites the listener tothis worldwide trip through unusual arrangements and sensitive interpretation. Sometimes whispering in the ear, sometimes protesting, sometimes talking about love ... she, in an intimate way, sings in several languages and immerses herself intensely in the universe of each song.