Musicians from different areas and cities. Different ages. Different sized. Different goals and dreams. From such different families.
In 2012 they made their debut. In a completely different formation. The band has had some changes in line-up. Some left, others came. The first and still existing members are Alexander Niermann, Marlon Bösherz and Jörg Buttler. Tom Hellenthal was quickly added and Lukas “The Hungarian Sziego” Sziegoleit, who after almost six years, in 2019, left the summer tour and the previous pianist Lucius Nawothnig rejoined the band after a creative reorientation. Mary played the trombone and walked with us through sweat and beginnings. Max took her place and grows with us, ever closer and closer and has long since had a place of its own. For a few years and two records Jacob was on saxophone. Who is now opening up his own horizons.

The fourth album SAFT is also a little bit the experience of these years and the very many concerts in different countries in which you always immediately feel comfortable, organize evenings and go out. Sleep in pubs in hotels and in tents in the fields, in front of lakes and rivers.
That's driving off and sleeping in a tent by a stream in front of the Austrian border.
Wild camping in Switzerland in front of the rising moon over two mountain peaks, because a bed is not reserved for each individual in the five-star hotel until the next day.
Jazz festivals are happy and the giants play and Botticelli Baby is there too, presenting their cause and people think it's very good. The jazz audience no longer understands the world because at the session in the basement after the one and a half hour gig, five of the musicians still talk and jam through the night. After a hot demolition party in a circus tent with a capacity of almost 800 people, in which the technicians have to drag the stage under the band to see if the vibration, a few of the band go swimming naked with a few people who just freaked out in the first row. Why not.
And the hours in the tour bus? For hours and miles. It's awesome. The bus is your own. People chat, discuss, sing, listen to music, read, sleep, write poems, play computer games, eat, talk on the phone, live.
It feels good when we step in and drive off and then it sometimes hurts. Because yesterday the gig was hard and the sleep was too little and the bus means driving six hours again and not getting to bed before four five o'clock, wonderful landscapes, dozing ... See you.
-Oh my God I'm driving through rainy Belgium and listening to the album SAFT. Shit, we were there and it just fits like ass on a bucket. 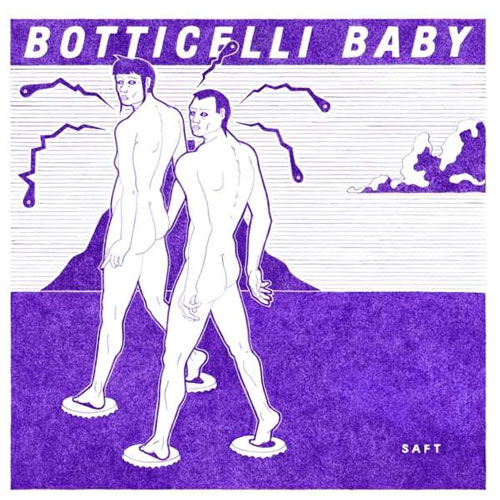 The Essen band "Botticelli Baby" is made for the stage. To keep a distance to the seven men and their music is quite difficult, because their new album "Saft" is filled with a lot of cheerful and danceable music. With it, the band exudes concert energy. Intoxicating music! - bremen zwei 02 2021

"SAFT" is more mature, more thoughtful, more fought for. The solos tell more stories, the lyrics are more poetic. However, the party to life is not missing at all. Multi-layered is this album and multi-faceted, as always.