Caixa Cubo are a jazz-fusion trio who plug in to a current of Brazilian music that was exemplified by Azymuth in the 70s.

Caixa Cubo is one of the most distinguished piano trios in the modern Brazilian Jazz scene. Without being guided by fads or the phonographic market, the group formed by Henrique Gomide (keys), Noa Stroeter (acoustic and electric double bass) and João Gabriel Fideles (drums) reaches in 2022 its eleventh year of activity.

The trio explores rich rhythmic Brazilian musical landscapes, combining them with modern jazz trends. In an absolutely autonomous and coherent path, the musicians of Caixa Cubo play what they want, what moves them. Whether getting into more experimental sounds, like in the electric albums Saturno, Quartzo and CANIL_ or in personal re-readings of the timeless repertoire of Brazilian music, like in the albums Misturada and Enigma - A Música de Garoto.

The trio's last album Angela was chosen as one of the best albums of 2020 by BBC6, Bandcamp, Gilles Peterson and others.

Caixa Cubo has been touring regularly in Europe since 2011 and has performed in venues like Jazz à Vienne (France), Riverboat Jazz Festival (Denmark), Auditório Ibirapuera (Brazil), Jazzkeller Frankfurt (Germany) and Centro Cultural Franco Moçambicano (Mozambique), having shared the stage with musicians like Tony Lakatos, John Rucco, Yamandu Costa and Paulo Belinatti. According to Wolfgang Sandner, biographer of Miles Davis and Keith Jarrett, “after more than ten years of playing together as a trio, the three can apparently read each other's musical minds (...) An interaction that is rarely offered so perfectly“ (FAZ, 15/05/2019). 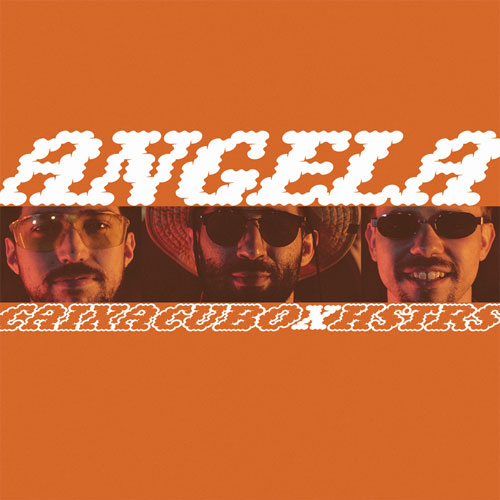 Without being guided by fads or the phonographic market, the group formed by Henrique Gomide, Noa Stroeter and João Gabriel Fideles reaches its eleventh year of activity.
In an absolutely autonomous and coherent path, the musicians of Caixa Cubo play what they want, what moves them. Whether getting into more experimental sounds, like in the electric albums.

Saturno, Quartzo and CANIL_, or in personal re-readings of the timeless repertoire of
Brazilian music, like in the excellent albums Misturada and Enigma - A Música de Garoto.

Angela
The group’s latest album Angela (Heavenly Records) has been collecting praise from specialized critics and figures on the list of best albums of 2020 according to such vehicles as BBC6, Worldwide FM and the DJ Gilles Petterson.

Recorded in December 2018, the album features the singer Zé Leônidas on Palavras, and includes arrangements of songs like Baião Malandro by Egberto Gismonti and Dark Prince by Geri Allen, in addition to the group’s original compositions.

The trio have split their time between Brazil and Europe in recent years, having been awarded scholarships to study at the Royal Conservatory of The Hague, Netherlands.

Talking about Caixa Cubo and the album, the British DJ, broadcaster, producer, writer and jazz lover, Patrick Forge said:
‘It used to be the case that young Brazilians were either oblivious to or disdainful of their musical heritage, such was the omnipotence of “baile funk” and the influence of foreign music. A perplexing conundrum for those like myself who’ve found so much to treasure in those traditions, particularly from the 60s and 70s when Brazilian music culture reached an apotheosis of creativity.

It’s been so gratifying in recent years to witness a renaissance of those musical values, as a young generation of players more connected to worldwide trends have also sought to reconnect with their own lineage. Brazilian musicians have a unique feel, perhaps samba has literally infused their DNA, no matter what style or approach they take there is always that indigenous quality to the music.

There is something so fundamental and pure about their sound, the interaction sounds fresh and spontaneous, intimate and real. This is a record that will continue to delight with repeated listening such is the quality and grace of the playing. The sole vocal track Palavras (featuring Ze Leonidas) is a beguiling beauty evocative of Milton Nascimento and the best of Brazil’s melodic and harmonic traditions. Their version of Egbert Gismonti’s Baiao Malandro spins the off the wall funk of one of Brazil’s greatest composers into a more digestible contemporary form without losing any of its madcap brilliance. A triumph that will translate as well to fans of Yussef Kamaal and the younger generation of jazz converts as to seasoned old heads like myself.'