Christoph Neuhaus is a German guitarist/composer active in the field of jazz.

Christoph Neuhaus, born in 1986, is a Stuttgart native and musician. More concretely: he is a versatile as well as busy guitarist. His music is formed by feeling, hearing and technique. Consequently, it is almost logical that the guitarist moves at the interfaces between jazz, groove, blues and folk.

After a national - Mannheim - as well as international - Amsterdam, Basel - education at the music academies, as well as private studies in New York City, he returned to his hometown Stuttgart, where he lives and works since 2012.

Christoph Neuhaus is perceived as a multifaceted character of rough and smooth sides. Thereby he is not a character who is edgy, but one who stands out, who leaves traces in the structure of the music group and in the ear of the listener. As a creative and interactive artist, he has a firm grip on his instrument. This can be heard live - at over 120 concerts annually as well as in the studio for numerous bands & projects - throughout Europe.

The accomplished musician leads his own formations, composes and additionally works as a workshop lecturer. "How can I enrich music?" is one of his questions, to which he knows how to give complex answers that should be heard. Therefore, he remains open to many musical suggestions, continues to research, reinvents himself and filters all influences to remain authentic. 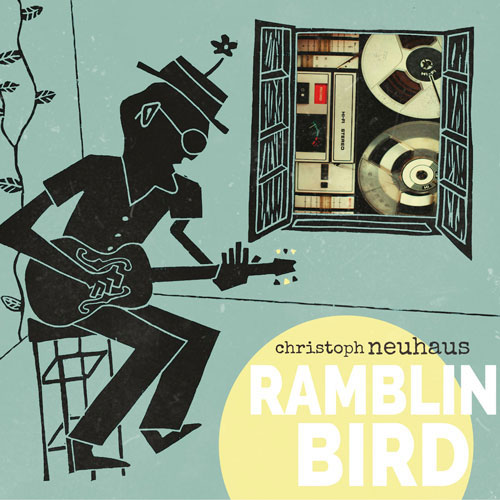 Listening to the first tracks, the following associations immediately jump into your head: (folk) songs, country & western, rock, funk and pretty much everything in between. Further associations: This music belongs to the genre guitar - including many styles and variations. Exception: Jazz, which is not to be guessed or only in the very broadest interpretation. But this should not disturb the friends of contemporary guitar music. In the titles there are straight rhythms with a lot of drive. In addition there are beguiling vocals and of course lots of guitar sounds. Then there is the blues.

Some titles in detail:
Folk Songs, Poems, Voices
Patience for the Unacquainted,
Downright classic folk music. The guitar accompaniment is gentle, restrained, Pauline Ruhe's voice is clearly in focus. Her singing is enhanced by polyphony towards the end of the chorus. With songs of this kind it also depends on the lyrics, on the content. The slide tones of the guitar give this track a sound of country & western. It could also be film music for a road movie - somewhere in the vastness between Arizona and Brandenburg.

Silent Observer
Here Franziska Schuster sings her evocative part with a bell-like voice. Silent Observer is a song in the best tradition of folk music and songwriting, unimaginable without underlining guitar accompaniment. Soloistically the bass is allowed to embellish the theme, the drums bring a somewhat heavier note to the otherwise tranquil track. Towards the end, Franziska's voice rises into the dramatic, then quietly becomes true to the title.

Rock & Funk & Fun
Bottled Up Dancer, Walk up Fall Down,
There is this gritty rock without frills of any kind. The songs come off as a punched through, simple beat with vocal interludes. The rest is done by the lively, staccato, somewhat screeching guitar runs. For the fans of hard core rock this is perfectly enough.

Blues
Ramblin Bird
This one must not be missing. There is hardly a guitarist who doesn't have an affinity for the blues. This is also the case with Christoph Neuhaus. At the beginning of the piece the listener believes to have landed with the old master Jimmy Hendrix. If it weren't for Christoph's and later Pauline's voices, which make it clear. Then the title turns out to be a gritty blues in a brittle sound coloring.

Get Out
The blues is laid out in a rock-classic way. The band straightforwardly celebrates this musical form, which is considered the basis for jazz and rock alike, while retaining its independent genre. The Blues must go on ... that's how it sounds. Not least because of the earthy solos of guitar, electric piano and the vocals of the bard Neuhaus.

Latin Songs
Stollin
A tough of Latin beat along with associated guitar playing. The title becomes more intense, increases, rhythmically it goes on lively. The clashing runs of the electric piano create more than just a sonic hint of the legendary album Return to Forever by Chick Corea. Pauline Ruhe's voice sinks into this ambience of Latin and fusion, further smoothing out the already round corners in a samba-soft manner. Christoph Neuhaus meanwhile reaches into his guitar magic box, pulls a few tricks out of his repertoire, lets them burst soloistically.