Ernst Bier studied with Billy Brooks at the Swiss Jazz School in Bern from 1976 to 1978. He supplemented his studies in the early 1980s with private studies with Vernel Fournier, Charlie Persip and Elvin Jones in New York City where he lived and worked from 1982 to 1987.

Ernst was leader of the band Just Friends between 1977 and 1982, then played in the trio of Belgian guitarist Paolo Radoni and in the trio of Hungarian guitarist Attila Zoller (1980 to 1984). In New York he was a drummer in the house band of the Blue Note jazz club, under the direction of Ted Curson, and with the New York tap dance company "New York City Tapworks". Since 1984 he was a member of the band of Perry Robinson Quartet. He also performed numerous concerts and tours with Gene 'Mighty Flea' Connors, John Marshall, Rainer Winterschladen, Klaus König, Simon Nabatov, Ed Schuller and many others.

In 1987 he moved to Cologne and in 1992 to Berlin where he still lives today. There he was co-leader of the quartet with Mack Goldsbury and Ed Schuller, which was partly extended by Herb Robertson. From this formation came the albums "At Night When You Go To Sleep" and Next Move.

From 1977 to 1979 Ernst Bier was a lecturer in percussion and improvised music at the PH Göttingen, from 1978-80 he taught percussion at the Jazzmobile Workshop (Amhurst, Mass., USA), and since 1992 he has been the director of the Living School Workshop in Berlin (together with saxophonist Mack Goldsbury). 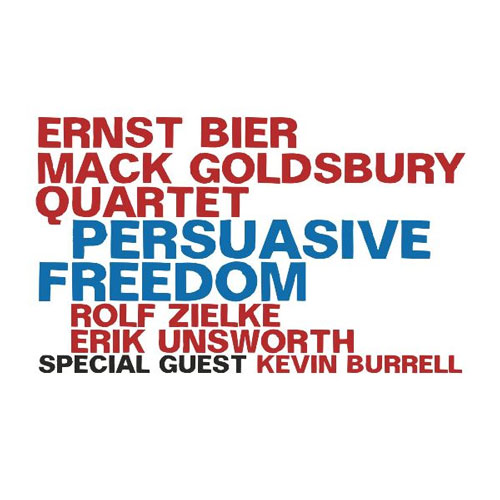 The tracks in detail

Hymns - Coltranesque themes
Time on Monday
Sax and bass begin cautiously, searching for a theme. A prelude drags on until the piano introduces the found theme. This sounds strongly hymnal, at times coltranesque. Somewhat pathetically, Sax and the rest of the band continue. A bass solo bridges the break to hand the baton of the solo to the drums - a theme for Trane lovers.

Moving themes - free swinging - Monk'esque titles
Like Derwyn
After the melody line sounds, it's up to the piano to provide the harmonic drive. The rhythmic drive is handled by the band as casually as it is competently. Mack Goldsbury can't help but thrust intense as well as expressive cries of his saxophone into melody and harmony. The piece has some of the Monk esprit. There's plenty of room for solos. So also for Ernst Bier, who drums the thematic pauses and gaps with the concentrated - in the literal sense - beating power of his many years of experience as a soloist.

Strange Things
A programmatic title. The band plays freely at the beginning, but then slides into pleasing melody lines and improvisations. It almost sounds like a ballad, but only very briefly. Then the unleashed sequences of his motifs flow from Mack Goldsbury's sax. After the bass contributes to the harmonic reconciliation, the tenor picks up where it left off and decides to let the theme fade out as a free ballad after all.

Outgoing rhythmic pieces
Samba Macumba
Pleasing melody and "on-turning" rhythm. As the title says, so it sounds.Long soloistic passages - played by the detached Rolf Zielke on the piano - lead the way, only to be replaced by the voluminous sound of the tenor - mature power sound of the quartet. The title Persistence sounds similar with swinging motives, walking bass and agile drumming as rhythmic basis. This goes off.

Persuasive Freedom
The title theme introduces itself with a striking statement, while remaining entertaining. As soon as a theme, a rhythm, is " approached ", it is immediately released for improvisation - free of traditional harmonies.

Mother's Day, Avenue G
These are also titles with immensely driving rhythms. Interlaced figures, which spiral up into the dramatic. Especially the Man on tenor sax lets the tension rise. This only works so well because the other co-creators provide a musical basis in which there is nothing, but really nothing, to gripe about. For "our Berlin" jazzers this is highest praise.

Ballads
Incandescant
Ballads have to be, because the musicians have their stories to tell. Mack makes the beginning: coltranesque, full-bodied, a mature tenor saxophone in the best tradition of the great jazz classics. The piano fits wonderfully into the musical statement of this ballad - sparkling, swinging, refreshing. The bass doesn't want to be left on the sidelines. Erik Unsworth complements the playing with virtuoso runs of his warm-toned figures. What would a ballad be without the singing elegance of the bass violin's low wood tones? A few pleasing melodic dabs of the saxophone, the theme gently fades away.

Grey
Another ballad - something to dream about. But not title gray, but of the dark red beauty of the "timbre" Bordeaux, which gives its name to balladesque jazz.

Souful Bill
Here Goldsbury blows flute for once. A swinging theme, performed ballad-like, conveys tranquility. Balanced, the musical elements of calm and tension are distributed - a ballad for daydreaming in the late afternoon.