Eyot is a Serbian fusion jazz band. The quartet plays an eclectic music, not related to any genre.

With more than a 300 concerts in 25 countries around the world, and great reception from both critics and the audience, EYOT stands out as one of the most interesting bands coming out from Europe in the last decade. Free of genres, EYOT brings a beautiful eclectic sound that swims from rock to jazz, punk and ambient, impressionism to romanticism, all formed into strong compositions. Their live performances are filled with energy and emotions that bring the listener deep into their personal world and create a unique experience.

“It's every serious group's desire to craft an identifiable, and as far as possible, a unique sound whereby just a few notes leave little doubt about who's playing. Serbian quartet Eyot achieved that with its splendid debut, Horizon (Ninety and Nine Records,2011), where minimalism and power went hand-in-hand in an intoxicating mix of jazz, art-rock, classical and Balkan folk melodies. Drifters largely follows the same blueprint, though there is perhaps greater density in the group's sound (…) It doesn't take too great a leap of imagination to see the power of Eyot in concert. That fact Eyot has played jazz, punk and rock festivals, as well as in Cultural Centers, says something about the special chemistry of the diverse musical elements that makes Drifters such a rewarding experience and a fine follow-up to its debut. A band to watch out for // Ian Paterson @ allaboutjazz.com

“The proud representative of a new generation of European musicians, this Serbian quartet breaks all temporal, geographical and cultural boundaries of Balkan Jazz, explosively blending classical music, art-rock and traditional melodies. In its quest for new creative sound combinations, Eyot restlessly explores the limits between tradition and innovation and leads European Jazz off the beaten track. Known as the Nirvana of Jazz, the four musicians light up the stage with outstandingly fresh and electrifying sounds. The quartet brings to life a music of unique creativity which strikes a pleasant balance between simplicity and sophistication, and is both coarse yet delicate” // Cully Jazz Festival 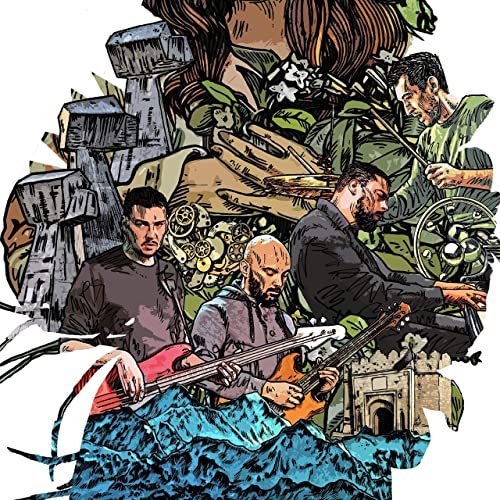 The name of the album is 557799, after the composition number 7, which is about the continuous rhythm pattern. 5/8 5/8, 7/8 7/8, 9/8 9/8 it goes. These 3 odd rhythms are the foundations of the traditional music of the Balkans, but for us it is more than just the number - it is the epitome of life and history, which has always been turbulent in this part of the world. It is our heartbeat. It is an oddity full of life and emotions.