Florian Dohrmann is a German double bass player and composer.

An elegant wanderer between styles on double bass!

Solo parts with style, walking bass with groove or a subtle song foundation: musician Florian Dohrmann has garnered a broad artistic spectrum through the years with his Benjamin Patočka double bass from Bohemia. The double bass model with the warm, full sound is almost 120 years old (built in 1903), more than double the age of his human sound creator (*1972 in Tübingen) - but that corresponds excellently with innovative music. Maybe the strings (made by Gerold Genssler, Sonores) add the last refinement to the aesthetic sound - their core is made from silk.

Florian Dohrmanns ensembles integrate styles from jazz, soul and pop through classical and contemporary influences to klezmer and world music. There were moments and encounters in his life that turned his way to a certain direction. The enthusiastic piano student, who already saw himself on the classical concert stage, discovered the electronic bass, soon the double bass - and most important: jazz. Miles Davis' quintet records Cookin', Steamin' and Relaxin', all with Paul Chambers on double bass, brought him on his way. He decided to study jazz and pop at Stuttgart Music College (Musikhochschule Stuttgart). Thomas Stabenow became an important professor and mentor there, and outside of the music college, also Dieter Ilg. Among his idols, Dohrmann names senior jazz greats like Paul Chambers and Charlie Haden, but he was, and is, also inspired by other artists, for example Dave Holland or Lars Danielsson.

A first trio that lasted two decades came about, when he was 25 years old and finishing his studies. His cooperation with at that time only 16 year old, exceptional clarinetist David Orlowsky turned out to be an essential step toward big stages. There were two different guitarists, until from 2005 Jens Uwe Popp became a long time member of the band. In 2019 the three played four sold-out farewell concerts at Schleswig-Holstein Musikfestival. What they created until then, is well worth listening to (and seeing): several records (with Sony Classical), two ECHO Klassik awards (for Noema in 2008 and for Klezmer Kings - a tribute to Naftule Brandwein and Dave Tarras in 2015), the publication of many compositions (with Schott/Advance Music), and numerous concerts worldwide. At home in Germany, the trio with their special integration of Yiddish folklore, klezmer, classical music, jazz and other styles were frequent guests in concert halls and at big festivals, from Rheingau Musikfestival through Festspiele Mecklenburg-Vorpommern to Schleswig-Holstein Musikfestival. Their concert tours equally led them into renowned Carnegie Hall in New York, to Ukraine and South Corea. Among the highlights are performances with orchestras like Kammerakademie Potsdam, Münchner Rundfunkorchester, Aachen Symphonie Orchester, Nürnberger Symphonikern and Swedish Jonköping Sinfonietta. There they presented their trio music in large scale arrangements to an enthusiastic audience. Also worth listening to are their various cooperations with musical partners as Avi Avital, Daniel Hope, Iveta Apkalna, Klaus Paier and many more.

From 2019 on new things were ahead! In the last few years Florian Dohrmann has initiated various ensembles. That means more space for the double bass, as it now can be heard more often than before with inventive solo parts. As he already did in the former trio and other, earlier bands, the bassist also writes pieces and arrangements. Already started in 2017, there is his jazz quartet Blank Page with Joachim Staudt (saxophone, clarinet), Christoph Neuhaus (guitar) and Lars Binder (drums). The four dedicated their debut to composer Claude Debussy, whose music once already inspired jazz legends like Duke Ellington and Bill Evans. For a wanderer between the styles as Dohrmann, that is an ideal starting point for a repertoire, that makes recognize Debussys influences, integrates, changes, adds to and expands them. Well-known compositions Claire de Lune or La fille aux cheveux de lin can be heard in a new style and sound, combined with other arrangements and original pieces. The bands debut New Impressions of Debussy was added to the second quarter of the year list of best musicians in 2019 (list 2/2019) of German Record Critics' Award (Preis der Deutschen Schallplattenkritik).

Together with Austrian accordion and bandoneon artist Klaus Paier, who already had performed earlier with David Orlowsky Trio, the bass player founded a fascinating new duo end of 2019. With a great amount of space and sovereignty these two, who both compose and like to improvise, vividly exchange ideas between bow and strings, buttons and reeds.

Dohrmann took on several functions at a time for the stage project Feeling Good? to honour extraordinary singer Nina Simone. Fascinated by her music and life he developed script, dialogues and show, light design as well as film projections, and invited artists to his ensemble, like Fola Dada, storyteller Katharina Eickhoff, Ulf Kleiner on piano, drummer Felix Schrack and guitarist Christoph Neuhaus. With excitement the premiere in Theaterhaus Stuttgart at festival Osterjazztage 2020 was awaited. Due to Covid it eventually had to be postponed to an unknown date, as many other concerts and performances since early 2020.

Dohrmann and his ensembles keep going further on their creative ways - in the now existing forms. As soon as it is possible, they intend to bring their repertoires to the audience live and on site. Already now one thing is sure: there is going to be more than one premiere! 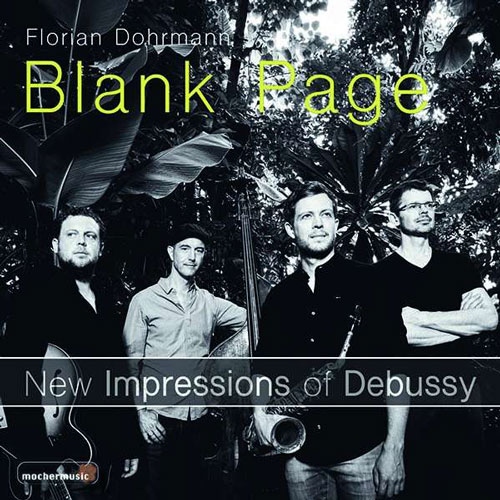 The tracks sound mature, the components of the music seem balanced. Rhythm, harmony and melody appear as a cohesive unit, presented in the narrative art of playing ballads. The subtitle indicates an exploration of the impressionist Claude Debussy. How might that sound in the language of jazz? An exciting undertaking.

Twilight Dance
The guitar opens with restrained chords. The bass clarinet immediately takes over with an extended solo: wide lines, stringently built-up tone sequences, all blown with the warmth of the deep woodwind instrument. Unimaginable that such music could not please. Meanwhile, the other participants provide the harmonic basis as well as the rhythm. Now it is the turn of a guitar solo to make its contribution to the embellishment of the theme. The bass of Florian Dohrman creates quiet figures, not rushing, but restrainedly driving. The pauses between the individual notes are very consciously integrated into his playing: fewer notes of the bass are often more - Charlie Haden perfectly demonstrated this. Close interplay with the drums expands the scope for the soloists. Again, Joachim Staudt's bass clarinet can be listened to: pleasing sequences, rounded lines, a soothing sound to revel in the beauty of the music.

Clair de Lune
Deeply layered sounds, ballad-like motifs lead into the theme. These are the singing soundscapes of the bass violin, almost indispensable for storytelling. The alto saxophone continues, draws its loops until the sound of the title theme. Now harmonic soundscapes resound, inviting the listener to calmly linger. Soloistic runs of the guitar by Christoph Neuhaus complement the theme. The whole quartet is characterized by sovereign as well as sensitive playing: Savoring melodies without giving up rhythmic drive and harmonic balance. Debussy could have enjoyed his Clair de Lune in such a way - impressionistic soul affinity.

Jimbo's Lalluby
The rhythm here is different from the epic ballads. Walking bass figures and distinctive guitar chords kick things off. A touch of Caribbean flair, spiced with a slap of funky beat rhythmically enrich the accented track. Restrained drumming by Lars Binder, who here - as in the other tracks - always plays with great feeling for themes and improvised parts. His differentiated drumming is committed to the "impressionistic" claim of the album. Guitar and alto saxophone sound in unison. The sax then expands the theme with clearly structured sequences, while the guitar lets its tones flow in, sometimes as a pointed chord, sometimes fingered soloistically. Now Florian Dohrmann shows what's in the body of his ancient double bass, what's in the fingers, and what's in the figures inspired by the theme, which want to express themselves as "impressionistic" jazz - quite expressively.

Pagoda Dream
The title gives it away. Pagoda Dream is also a poignant ballad in which stories are told. The long solos of Joachim Staudt's alto saxophone are ideally suited for this. His sax blows motifs and figures with Far Eastern intonation, giving a touch of meditation as well as a feeling of happiness.