"I started my musical career by playing the accordion on and off when I was five years old. After the accordion I started taking piano lessons but both of these fine instruments never really made me interested enough. Seems like I just needed more action as an active boy. Drums came to picture thorugh a neighbor and it was love at first sight. I started taking lessons with a great Finnsih drummer Tomi Parkkonen when I was 11 years old. I decided 28.1.1995 that I will be a drummer. I saw an incredible consert that day with a band called Groove Convention with Sami Kuoppamäki on drums and thought I want to do the same thing that drummer is doing. I also wanted to play with all the other fine musicians in the band. This actually has happened later on.

I believe this decision and the fact that I was cable of making it in such a young age tells something about me and my personality and my love for drums. There just wasn’t any other choice for me after this one evening in January 1995.

The way I see it drums are ment to create energy. They are also a great way of communicating with fellow musicians but also with the audience. Naturally drums are also fun but in the same time quite challenging as an instrument. It’s very easy to get a sound out of a drum. It just needs to be hit but to really make a good sound of it is a whole other world. And a very facinating one.

I’ve spend so many hours in practice room and I’ve had the priviledge to study with some of the greatest jazz drummers of our time such as John Riley, Adam Nussbaum and Ari Hoenig. I’ve also studied with many great Finnish drummers Jukkis Uotila, Marko Timonen, Markus Ketola, Mika Kallio, Sami Kuoppamäki, Kepa Kettunen and Rami Eskelinen to name few. All of them have had something unique to offer. I think in my case all the teachers and sometimes the mixed information was just beneficial since it made me to think and eventually realize how I’d like to sound and what are my stregths and weaknesses as a musician.

I’ve graduated as a Master of Arts from The University of Arts Sibelius Academy Jazz Deparment 2009. But since the interest in developing my own craft has followed me through out my career I ended up starting post graduate studies in the same university 2018. World seems to go around in circles and the next cirle for me is another six or seven years of studying. To me that six or seven years has always been a full artistic cirlcle after which something new needs to happen. The new cirle ends 2024 or 2025. Who knows what the world will be then. Drums are needed anyway to communicate and create energy."
Jaska Lukkarinen 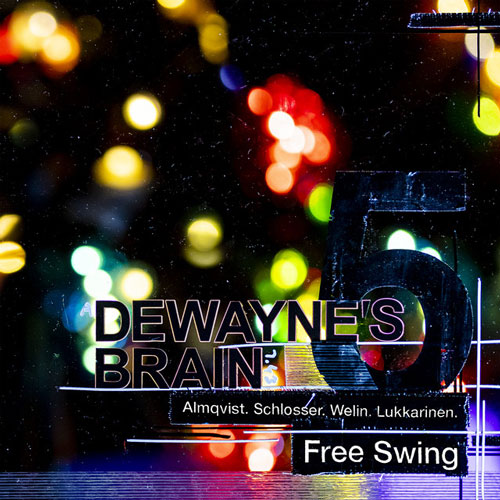 The always energetic and strong tenor saxophonist Karl-Martin Almqvist, one of the most well known Swedish tenor players in his generation, splits his time between small group collaborations and a tenor chair of the Copenhagen based Danish Radio Big Band.

The four gentlemen represent the absolute top in their own instruments in their native countries. Still the best thing to do for four close to middle age jazz musicians from three different countries was to form a new band with the same enthusiasm and joy as if it would’ve been their first band ever.

Free Swings first engagement in Växjö, Sweden led to an immediate recording session resulting a fresh outcome of rooted but yet free jazz music. The first EP Countdown 1234 was published by Finnish JASKAA -label spring 2019 and was soon followed by another EP Dewayne’s Brain. Each of the members are providing compositions and with the help of collaborative complementing the music is being played with mature beauty and tranquility.

But when it’s needed and the musical energy demands for it the flame really burns. Free Swings musical synthesis and courageous interplay is full of layers and hints from the giants like Ornette Coleman and Sonny Rollins melt together through Ellington’s idea of simplicity, John Coltrane Quartet’s energetic groove and Charles Mingus style of raw energy.