Joachim Staudt is a German saxophonist and composer.

Joachim Staudt's path to saxophone studies led him via Mannheim to Amsterdam, where he spent a total of seven years. There he not only immersed himself in the local jazz scene, but also took advantage of the city's cultural diversity to expand his musical horizons in many directions - from experimental improvised music to world music to Latin and soul. His career as a saxophonist has taken him to the BuJazzO under Peter Herbolzheimer, to various sideman jobs with Eddy Martinez, Roy Ellis, Tom Gäbel, Rainer Tempel, Flowriders and others, to festival appearances at the Montreux Jazz Festival, the Northsea Jazz Festival and on tours throughout Europe, Russia and the USA. His debut album "Drop In The Ocean" was released in 2010 on Personality Records. This was followed by the acclaimed follow-up album "Seven Wishes" in January 2018 and the current album "Quest" in 2020, both released by Moveo Records. In 2019, Staudt was nominated for the German Record Critics' Award as part of the formation "Blank Page". In addition to his work as a saxophonist, bandleader and sideman, Joachim Staudt has also worked as a composer for TV (ARTE, WDR, SWR, NDR) and film in recent years. 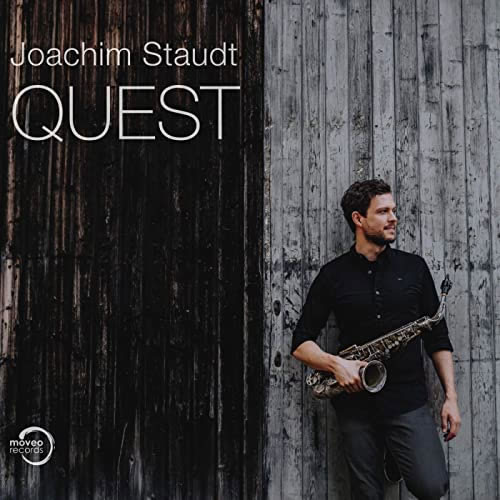 "Quest" - the mystical search for knowledge and meaning, the great adventure of life. This is the title and at the same time the program of the new album of saxophonist Joachim Staudt. After the two highly acclaimed predecessors "Seven Wishes" (Moveo Records, 2017) and "Drop In The Ocean" (Personality Records, 2010), Staudt has succeeded with "Quest" his most impressive and mature work to date.

The ten songs - exclusively original compositions of the band leader - captivate with their depth and independence. The quartet forms a magical and stirring world of sound from these compositions, whose roots are deeply rooted in jazz. At the same time, the music of this album lives from the variety of subtle influences from the most diverse genres. Sometimes there are borrowings from film music, sometimes West African or funk-inspired grooves, sometimes oriental or impressionistic timbres. It is these contrasts that keep the listener enthralled.

Joachim Staudt's warm saxophone tone, which sometimes breathes airily and then again grabs powerfully, characterizes this album. As a harmonic complement to this, the bass clarinet sounds wooden and edgy in some pieces. The Fender Rhodes piano, which has shaped many songs since the 1970s with its distinctive sound, contributes much to the depth of this album with its warmth and sonic density. Combined with the grounded and soft foundation of bass and drums, this creates the distinctive sonic character of this album.

Staudt's previous career led him to study in Amsterdam, where he spent a total of seven years. There he not only immersed himself in the local jazz scene, but also opened his horizons to a variety of other musical styles, from soul to free improvisation and electronic music. As a saxophonist, his path so far has led him through the BuJazzO under Peter Herbolzheimer, to various sideman jobs, including with Eddy Martinez, Dawn Penn, Roy Ellis, Tom Gäbel, Rainer Tempel, Flowriders, to festival appearances at the Montreux Jazz Festival and Northsea Jazz Festival, among others, and on tours throughout Europe.

He is supported on the Fender Rhodes piano by Anselm Krisch. The pianist and keyboardist is a sought-after sideman and initiator of his own projects (Anselm Krisch Trio, Flüstertüte) in both traditional jazz and fusion.

Florian Dohrmann on double bass has toured halfway around the world as the longtime bassist of the David Orlowsky Trio and has won several Echos . However, he has never neglected his love for jazz. Successful projects of his own (most recently Florian Dohrmann's "Blank Page") speak for themselves.

Drummer Lars Binder has an impressive portfolio and can be heard regularly throughout Germany with singer Cécile Verny and a variety of other jazz formations. With the Mannheim band L14,16, Binder has twice won the German Record Critics' Award.