Luise Volkmann is a young saxophonist and composer based in Cologne, Germany.

She studied Jazz Saxophone in Leipzig (HMT) and Paris (CNSMdP) and Composition in Cologne (HfMT). She has lived and worked in Germany, France, Danemark and Brazil, and is constantly involved not only in music, but also in social and cultural organization.

In 2016 she has been invited beeing resident at the Cité Internationale des Arts in Paris. 2017 she released her first debout album with the large ensemble Été Large. The CD was chosen by the german magazine „Die Zeit“ as one of the best CDs in 2017. The radio station "BR Klassik" named her mixing of classical music and jazz "Kammer-Jazz".

In her three years living in Paris she cooperated with the most interesting musicians collectives such as Umlaut, COAX, Tricolectif and Collectif LOO. 2018 she realized several sound performances with the Goethe Institut Paris.

Her compositional works were first published at Editions Leduc in 2017. In 2019 she realized a work for the Bauhaus jubilee. 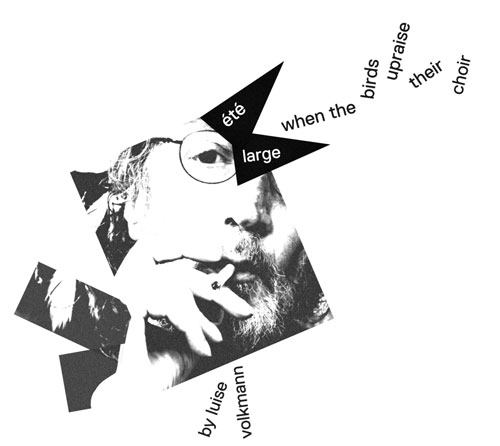 Été Large by Luise Volkmann - When The Birds Upraise Their Choir

Luise Volkmann is concerned with examining the attitudes of the so-called '68 generation and the rock music of the 1970s. Her fascination ranges from the protest music of the Woodstock era to the destructive elemental force of punk.

What could be better than watching little kids jumping obliviously into a puddle, no matter who gets dirty and how. We adults have largely lost this feeling of the reckless productivity of the creative moment, but when you listen to Luise Volkmann's new album, that's exactly the effect you get from the first moment. There's a huge pool of dirty water, and the bandleader jumps right into it with her entire pack, so that it splashes on all sides.