There is something magical in Maria Baptist's playing. Her hands dance across the keys. When Baptist makes music, you can't take your eyes off her, off her movements, which naturally carry every note. She lures her listeners into worlds outside the concert hall. Large-scale musical pictures full of different moods and emotional states are created in the mind. It is not Baptist's breathtaking improvisations, or even her pianistic challenges, which she masters so amazingly effortlessly, or her sheer impressive balancing act between song-like, catchy music and avant-garde sounds, which fascinate critics and audiences alike at each of her performances: Above all, Baptist's art lives from her unmistakable personality, her absolute devotion to the moment, her energy and truthfulness. If you listen closely, you will find echoes of Bach, Bartók or even Tyner, then again of Evans and of course Jarrett, only to realize in the next moment that it is Baptist all over again.

The burning passion for jazz that comes through in many of Baptist's words and flashes from her eyes as she speaks is rooted in her private history. Talent comes threefold in her cradle, two composing grandfathers and a piano-playing father. Born in East Berlin in 1971, the freedom-loving art of improvisation exerted a strong attraction on the piano student early on - because jazz didn't quite fit into the political system at the time, this was initially a love affair with obstacles. Records by jazz greats such as Keith Jarrett and Dave Brubeck circulated only under the table.

When the Wall fell, Baptist was drawn straight to the metropolis of New York, where she continued her studies on a scholarship at the renowned New School University. "Inspiration, liveliness, freedom, creativity, challenges - everything that is important to me in life, that drives me as an artist, that feeds my longings, that touches me deeply, I found in New York." Says Baptist of perhaps her most formative time. In New York, Baptist meets Maria Schneider, who becomes an important mentor, a great artistic role model and close confidante for many years. In the mid-1990s, Baptist returned to Europe and won numerous prizes and competitions while still pursuing studies in classical composition at the Hanns Eisler Academy of Music in Berlin. The rbb was already convinced of Baptist at the beginning of her career and co-produced her debut CD Crazy Dreams in 1998.

The increasing diversity of Baptist's artistic output over the past decade defies easy description. Her music taps into so many realms that one could almost forget that it all comes from the same woman.

At the same time, Baptist works as a conductor and composer with renowned big bands such as the NDR, hr, Reykjavik Big Band and the Budapest Jazz Orchestra. City Grooves (2011), Baptist's ECHO-nominated jazz orchestra debut, elevates her to the forefront of big band composers, "now comes another strong contender, Maria Baptist, whose musical language is arguably the clearest since Grammy winner Schneider shook up the scene"(allaboutjazz).

In connection with the album, the renowned DOWNBEAT Magazine writes of "Baptist's musical instincts, harmonic intelligence and compositional imagination" which "combine the aesthetics of the European tradition with American jazz understanding". The recording appeared as a reissue under the name Music for Jazz Orchestra (2013) along with a live recording from Jazz Fest Berlin and Baptist's original scores.

In contrast, there are several collaborations associated with classical music, such as Baptist's unprecedented recording of Schoenberg's "Pierrot Lunaire" with jazz improvisations in the spirit of its creator. Worthy of note is Baptist's album "Episodes" (2013) for piano and string quartet, with which Baptist "succeeds in bridging the gap between the vocabulary of jazz and that of chamber music" (rbb). Baptist's sound language doesn't want to be pigeonholed; she doesn't look for catchy buzzwords like jazz or classical. "When composing, I follow my inner voice, my individual expression. I draw from my musical roots and at the same time detach myself from them again."

In addition, Baptist devotes herself to solo piano playing. Her album Self-Portrait (2014) and subsequent tour of 25 cities in 3 countries across Europe, may be the highlight of Baptist's impressive career to date. Self-Portrait has a much deeper meaning for Baptist than just being an album title. With her musical self-portrait she gives a deep insight into her innermost. "When I sit down at the piano, I try to empty myself so I can give myself completely to the moment." You can't get any closer to Baptist's pulse, which resonates with every note. It was no accident that Baptist chose New York to record in; after all, she spent perhaps the most formative time in her life in this place that has since become a second piece of home. "I was looking for that vibrant, urban energy and very familiar atmosphere in New York for my recordings."

Through all of this diverse output, Baptist's own signature always remains unmistakable.

A professor at the Hochschule für Musik "Hanns Eisler" Berlin, Baptist teaches her own composition, arranging and improvisation classes and holds master classes at the Academy of the Arts Reykjavik, the Franz Liszt Academy of Music Budapest, the University of Stellenbosch, the Hochschule für Musik und Theater in Munich and Hamburg, and the Filmhochschule Potsdam, among others. Baptist currently commutes between Berlin and her adopted home of New York. 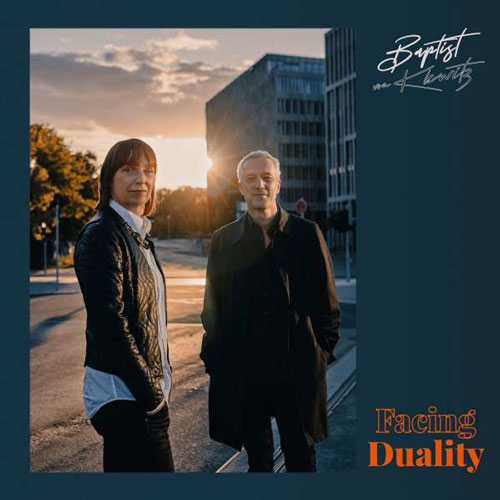 The title of the CD reveals the musical intention of the project. To make the duality of mutually influencing forces of a musical world creative. Two instruments, two personalities should suffice: Maria Baptist's grand piano and Jan von Klewitz's alto saxophone. The rest is magic, inspiration and a little mystery. Well, does such a high artistic standard work? The Berliner in himself would say upon listening to the CD: There is nothing to complain about! That would then be the highest praise that could not be surpassed. For non-Berliners, further explanations would be useful. Here we go.

Compositions
The CD contains familiar titles, mostly performed as ballads and taken from previous albums of the Maria Baptist Big Band and the latest solo CD, but also new compositions. As usual, all the titles are exquisite works that have an impact through their musical substance. Consequently, the titles can be played convincingly by a large formation (big band) as well as by a duo, which is true here.

Rhythm
At the first listening, one is immediately struck: The tremendous rhythmic and dynamic presence of the music assaults the listener, mercilessly. There's big sound in just two instruments, eager to show that two gifted musicians can come close to the sound of a big band. Maria Baptist's piano alone is a "big band light". Right and left hands constantly influence each other, striking sophisticated harmonic chords, indulging in intricate melodic lines, playing irrepressibly freely (Midnight Rain) and coming back to the motif of the title. Now, this may be part of the upscale craft of outstanding jazz pianists, but this confident ease with depth that can be experienced on Facing Duality is fascinating and meets the highest standards. This is true of all the tracks, but especially: Facing Duality, Minotaur, Sea of Blackness, Gratitude, Cloud 9, Longing.

Melody & Harmony
Pleasing melody lines (Natural Landscape, Minotaur, Midnight Rain, Cloud 9) introduce a title, develop it, vary the motif. The pieces give the partner the freedom to make something highly original out of the compositional material. These themes contain the whole spectrum of musical possibilities, which are explored and lived out soloistically and improvisationally. This applies not only to the playing of the own person, but equally to the corresponding musical partner - face to face.

Playing style & improvisations
The tracks are compact, yet so openly structured that compositional parts are sometimes almost indistinguishable from improvisations, which alternate as complementary or conflicting passages. There is always something new, something different to discover. This is the art of the duo in jazz, which is also superbly recorded here on Facing Duality.

Not a matter of course, but the adaptation of a theme, the variation of ideas, moves through the playing of alto saxophonist Jan von Klewitz on an equal footing with that of his partner. The man on alto sax is a congenial partner with his intonations, his clearly structured solos, his expressive emotionality. This can be heard on all tracks. In general, all pieces have a high emotionality in their musical statements, which is transmitted directly. Ballads to indulge in, to dream, to sink into oneself. You can't complain, and neither can you: premium league!