Melissa Aldana was born in Santiago, Chile, and began playing the saxophone at the age of six under the influence and guidance of her father Marcos Aldana, also a professional saxophonist. Aldana began on alto, influenced by artists such as Charlie Parker, Cannonball Adderley and Michael Brecker, and switched to tenor when she first heard the music of Sonny Rollins. In her early teens, she performed in Santiago jazz clubs and was invited by pianist Danilo Pérez to play at the Panama Jazz Festival in 2005.

Aldana graduated from Berklee in 2009 and moved to New York City to study with George Coleman. She recorded her first album, Free Fall, which was released on Greg Osby's Inner Circle Music imprint in 2010. Her live performances during this time included appearances at the Blue Note Jazz Club and the Monterey Jazz Festival. Her second album, Second Cycle, was released in 2012. In 2013, at the age of 24, she became the first musician and the first South American musician to win the Thelonious Monk International Jazz Saxophone Competition, in which her father had participated as a semi-finalist in 1991. The prize was a $25,000 scholarship and a recording contract with Concord Jazz. The Washington Post reported on her win, describing Aldana as "a new awareness of possibilities and directions in jazz."

In addition, Aldana was awarded the Altazor National Arts Award of Chile and the Martin E. Segal Award from Lincoln Center. She has performed concerts alongside artists such as Peter Bernstein, Kevin Hays, Christian McBride and Jeff "Tain" Watts, as well as at many festivals, including the Copenhagen Jazz Festival, Twin Cities Jazz Festival, Umbria Jazz, Vienna Jazz Festival and Providencia Jazz Festival in Chile. She also performed with Jimmy Heath at the 2014 NEA Jazz Masters Award Ceremony and was invited by Wynton Marsalis to perform at Jazz at Lincoln Center.

In 2012, Aldana formed a band, Melissa Aldana & Crash Trio, with Cuban drummer Francisco Mela and Chilean bassist Pablo Menares, a friend from the Santiago jazz scene several years earlier. In July 2014, this band released its self-titled debut album on Concord Jazz, a record deal that was part of Aldana's prize for winning the Thelonious Monk Award. In March 2016, the group released its second album, titled Back Home, on Word of Mouth Music, on which drummer Mela was replaced by Jochen Rueckert.

On her latest album, Visions (Motéma), Aldana combines her work with the legacy of Latina artists who have preceded her, creating an avenue for her own expression. Inspired by the life and work of Frida Kahlo, Aldana creates a parallel between her experiences as a saxophone player in a male-dominated community and Kahlo's experiences as a visual artist striving to assert herself in a male-dominated landscape.

Melissa Aldana travels the world as a leading artist and is a sought-after educator. 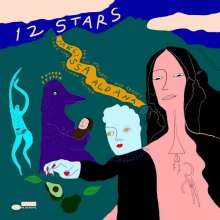 The beginning of the pandemic was a period of intense, very painful change for me. At first, I felt paralyzed and scared. But I knew indulging that paralysis wasn’t the answer. As I struggled to make sense of what I was feeling, I started to understand the importance of acceptance and forward motion – the practice of letting go. This process is critical for music as well. Letting go – relinquishing control – is how you grow and become the musician you are meant to be. So I turned inward.

For some time, I had been very curious about tarot – the symbols, and the actual story of the tradition. So I took the lockdown as an opportunity to learn more about myself through the process of learning tarot, whose focus is the journey of an individual. As I studied the cards, I started writing music about each of them, individually. And I found that the process described on the tarot is a process that we all deal with somehow throughout our journey here on earth.

The album title arrived as I was learning about numerology and its connection to tarot. During that time, I discovered my own connection to the 3rd major arcana: The Empress. She represents my essence, symbolizing interlocking concepts of creation, motherhood, connection to nature, the universe. At the same time, she wears a crown that has 12 stars. I hope you enjoy these compositions, and my own personal process inspired by the Empress and each of these symbolic gestures of humanity and our shared process of self-reflection.

Falling
“Falling” is the first composition on my album and the tune that I was writing when I felt that everything in my life was falling apart. At the start of the pandemic, everything that I knew changed externally. That was the beginning of a very deep personal process, and the beginning of my journey composing the music for 12 Stars.

Intuition
I wrote “Intuition” while I was going through my process. I had this realization where I felt that all the things that I was questioning and looking for and trying to find meaning for, the answers were in me. And I just didn’t want to listen to myself. I didn’t want to trust that what I was feeling was truthful.

Emilia
I don’t usually remember my dreams. Last year, however, the pandemic brought on vivid dreams that felt real to me. Motherhood is something that I have always wanted to experience but, as years goes by, I have questioned whether it’s something I would be able to do. As I began my process of letting go, I started having a series of dreams where I had a little baby girl named Emilia. One night, she had trouble falling asleep, so I sang her a lullaby. The melody from my dream became my tune “Emilia.”

The Bluest Eye
This tune was inspired by the novel by Toni Morrison. The story follows a young African American girl who grew up after the Great Depression, around 1941. She was consistently regarded as ugly due to her mannerisms and her dark skin. As a result, she developed an inferiority complex which fuels her desire to have the bluest eye. While I was reading this book, I felt very connected to the story. There’s this idea of a “beauty” society has imposed on us – how much you are supposed to weigh, how are you supposed to dress, the color of your eyes, etc. As I was growing up in Chile, I felt this indoctrination very strongly, even more as I was reading the book. The story reminded me of my childhood where I thought that having blue eyes was a symbol of beauty and wealth. I remember how the girls in my high school would buy fake blue eyes to look prettier.

The Fool
Back in 2020, while I was going through a lot of internal changes because of the pandemic, I decided to get into something that was completely different. I’ve always been fascinated by the tarot. More interesting than the written part, for me, is the history of the tarot, how that relates to the journey of an individual. So, as I was learning about that, and about all the 22 major arcana, I decided to write a tune inspired by each one of them. The Fool is the first major arcana, first card, and it talks about this person that is in the beginning of his journey, going somewhere without a destiny – just a bag and his dog. And he’s not afraid to leave and experience life. That is how we’re brought into this world.

Los Ojos de Chile
I drew inspiration for this tune from something that happened in Chile a couple of years ago that is called Estallido Social. These were a series of massive demonstrations and severe riots originated in Santiago that spread to all the regions in Chile. When this happened, despite the fact that I was worried and sad over what my country was going through, I felt so proud to see millions of people going out and speaking up, going into the streets to fight for what they believed were their rights. So while people were protesting outside, many people lost their sight because they got shot by police officers using riot shotguns with rubber bullets. While all this was happening, of course the Chilean community of musicians in New York wanted to help. We held a benefit concert for an organization called Los Ojos de Chile – the eyes of Chile – and it was to raise money for people who lost their sight standing up for their beliefs.

12 Stars
“12 Stars” is the last on the album but the first one I started writing during the beginning of my process, back in March 2020. I finished its composition a year later in March 2021. Named for the crown that The Empress wears which has 12 stars, the tune celebrates the major arcana card that represents my essence as a soul. According to The Tarot Revealed: A Modern Guide to Reading the Tarot Cards, “The scepter is representative of her power over life; her crown has 12 stars representing her dominance over the year, and her throne is in the midst of a field of grain, representative of her dominion over growing things. The Empress is representative of the productivity of the subconscious, seed by ideas.” To me, finishing this tune also meant the closure of a period in my life because, as the legend goes, “A phoenix obtains new life by rising from the ashes of its predecessor.”
Blue Note