Michel Meis 4tet is a jazz band from Luxembourg.

Diversity runs through the Michel Meis 4tet’s music like the proverbial thread. Through its diverse moods and complex yet never arbitrary structures. The band offers compositions that are as elaborate as they are playful, as danceable as they are melancholic. This eclectic character is crystallized in Meis’ playful drums, the drummer fully assuming a hybrid identity nestled somewhere between his hardcore heritage and a penchant for quiet yet progressive jazz rhythms. His fellow musicians, Alisa Klein on trombone, Cédric Hanriot on piano and Stephan Goldbach on double bass, each have moments of technical brilliance – yet they never merely show off, their skills always surrendering to composition and atmosphere.

After their acclaimed debut album “Lost in Translation”, they now released “Kaboom”, a forceful sonic detonation as well as an impressive “tour de force”. In addition to his usual acolytes, Meis has surrounded himself with violinist Théo Ceccaldi for a long-winded, sinuous, and progressive album that features a dazzling and unpredictable crossing of genres and mood, giving jazz a fresh touch by introducing elements from (post-)rock, electro-pop or classical music. 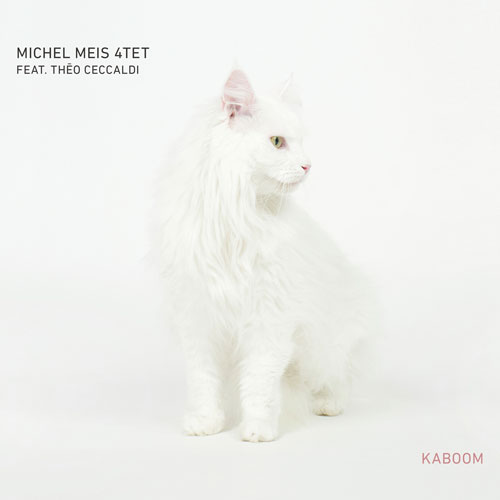 Kaboom, the second release of the Michel Meis 4tet, is, as its name rightly suggests, a forceful sonic detonation as well as an impressive “tour de force”. On its long-winded songs, Meis’s hybrid identity, nestled somewhere between his hardcore heritage and a penchant for quiet yet progressive jazz rhythms, comes to the fore. In addition to his usual acolytes, violinist Théo Ceccaldi features on some of the seven tracks and four improvised interludes. His strings elevate Kaboom to a dazzling and unpredictable crossing of genres and moods – the L.P. somewhat akin to those dynamic and mysterious concept albums that progressive rock bands used to dream of writing in the 70s.

From the outset, the first track Full Pedal Jacket takes its listener on a wild trip – starting with a muscular, fierce, Big Band-like opening, in which Alisa Klein’s powerful trombone stands out. It soon summons up a melancholic film-noir-atmosphere recalling to mind Humphrey Bogarts’ trench-coated stumble around a rain-soaked city, before atmospherically culminating in Cédric Hanriot’s catchy keyboard melodies. The latter sequences are somehow reminiscent of Gogo Penguin’s jazzy post-rock, especially when accompanied by Meis’ subtle yet vigorous drums and Stephan Goldbach’s elegant double bass. On this progressive opener, one senses that the band exceeds expectations set by its title’s pun – outrightly embracing the prolific diversity of the likes of cult filmmaker Stanley Kubrick.

It’s this diversity that runs through Kaboom like the proverbial thread. Through its diverse moods and complex structures that never feel arbitrary, the album regularly catches you off guard: there are mellow jazzy ballads (She), playful, luminous, almost dancy tracks (title track Kaboom or Red Desert Air), and melancholic abstract miniatures that make you wonder what kind of music Debussy could have written had he played in a jazz band.

Throughout the record, every single musician has moments of technical brilliance – yet they never merely show off, their skills always surrendering to composition and atmosphere. For the writing of the seven tracks, Michel Meis has focused on a trio of strong and fruitful influences – Mark Giuliana, Snarky Puppy, Ambrose Akinmusire –, to which Ceccaldi’s violin adds layers of emotions. As the album progresses from the anxieties of a track written in the very midst of the first pandemic lockdown (the aptly titled State of Uncertainty) to the final Re:build, the listening experience is indicative of the uncertainties and changing moods of the world we currently inhabit. Yet by following the intricate layering and complex rhythms, one senses that Meis never rules out the possibility of a more promising future.