Sebastian Gramss is a German double bassist, cellist and composer of contemporary music and jazz.

Sebastian Gramss (Cologne, Germany) is a German double bass virtuoso and composer of jazz and contemporary music. In 2013 and 2018 he received the ECHO Jazz award (national instrumentalist of the year).He studied double bass and composition at the Conservatorium van Amsterdam and at the Cologne University of Music.

Gramss released more than 25 CDs under his name. He’s been an inspiring and innovative presence in the world of jazz with his band UNDERKARL for the past 25 years, and recently with his new trios SLOWFOX (with Hayden Chisholm & Philip Zoubek) and FOSSILE 3 (with Rudi Mahall & Etienne Nillesen).

His bass activities include his solo works (Atopie), a long term bass duo series (started with Stefano Scodanibbio in 2008, and continued with Barre Phillips, Tetsu Saitoh, Mark Dresser, Barry Guy, William Parker and Joëlle Lénadre in over 50 concerts + recordings), several quartets and the international double bass orchestra BASSMASSE with 13 (and up to 50) bass players.

Gramss has composed for radio drama, movies and theatre and – among others – for choreographer Pina Bausch, and recently with/for the Ensemble Modern.

He teaches at the Cologne University of Music and University of Osnabrück, and gives master classes around the world. Extensive touring with his music has led him to venues and festivals all over the world, including Japan, India, Latin America, Russia, USA, Africa, and Australia. He was the co-creator and the curator/ director of SAMUR (South Asian Music Residency) in India in 2016 and 2017.International cooperations: Marilyn Crispell, Fred Frith, Sidsel Endresen, A. v. Schlippenbach, Tom Cora, Ensemble Modern, N. Wogram, E. Sharp, P. Kowald, Z. Parkins, Brötzmann, J. Tilbury, Conny Bauer... 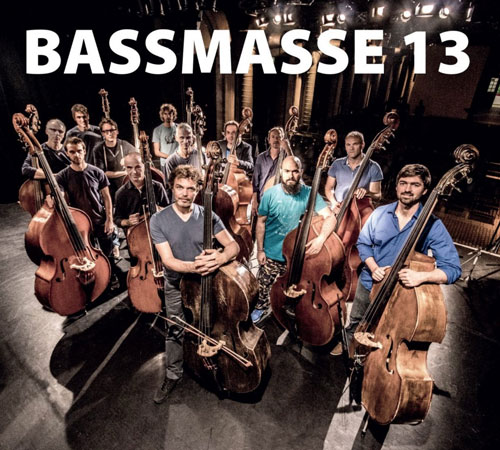 The new album BASSMASSE 13 / 45 presents, on the one hand, studio and live recordings of his ensemble BASSMASSE 13 (with 13 bassists), as well as excerpts from the already legendary opening concert of the Moers Festival 2014 with nearly 50 double bassists.

With the release of BASSMASSE 13 / 45, the two-time ECHO award winner (double bass - national) brings his diverse activities around his body instrument to a temporary climax.

Here, on the one hand, BM 13 shows itself as a compact, perfectly recorded "pocket orchestra" in contrast to the orchestral fireworks of BM 45. For the listener, the different interpretations of the pieces "Bucolico" and "Kleine Koalition" of both ensembles are certainly highly interesting against this background.

"HIGHLIGHT: ... Between orchestral force of intimate interaction: large-volume basses and concise harmonics, cross-rhythms and finely tuned sound modulations, lively grooves and orchestral sound layering, the various facets were made audible in the frequency band of the many basses." - (Neue Züricher Zeitung)