Stephanie Nilles is a US folk, jazz and blues singer and pianist.

Stephanie Nilles is a pianist, songwriter, singer, composer/arranger, and conceptual artist living in Appalachia. She grew up in the suburbs of Chicago, where she was a piano student of Annie Marchand Sherter and a cello student of Dr. Tanya Lesinsky Carey. She has been a gold medalist at the Fischoff Competition and a finalist at the Corpus Christi International Piano Competition and International Young Artists’ Competition.

She graduated from the Cleveland Institute of Music with a Bachelor of Music in classical piano performance, where she studied under Olga Radosavljevich and Anita Pontremoli. After relocating to New York City in 2006, she began writing music while working a desk job as administrative and research assistant to epidemiologist and bioethicist Adrienne Asch at Yeshiva University’s Center for Ethics. From 2008-2018, she performed 150-200 gigs a year throughout the US, Canada, and Central and Eastern Europe—and in her adopted homebase of New Orleans—the vast majority of which she booked herself. She has appeared at Carnegie Hall with Bobby McFerrin as a participant of the Weill Music Institute; and as soloist and band leader at the Stimmen Festival in Lörrach, Festwochen Gmunden, Bardentreffen Nürnberg, Die Wellenklænge Lunz am See, Calgary Folk Festival, Falcon Ridge Folk Festival, Ingolstadt Jazz Festival (Germany), Ballydehob Jazz Festival (Ireland), and at a mélange of jazz clubs, DIY & punk venues, and occasionally unsavory bars from points as west as Skagway, Alaska (in a brothel) to points as east as Budapest, Hungary (in a cathedral).

She composed and performed the scores of the film “Bark” (2017) and Radio Hamburg’s production of East of Eden (2020), and she has self-released six albums, three of which were picked up for European distribution by German roots label Tradition & Moderne. She is a fellow of the Wurlitzer Foundation and was a 2020 composer-in-residence in Taos, New Mexico.

Her collection of arrangements of Charles Mingus' music for solo piano, I Pledge Allegiance to the Flag-The White Flag, was released in 2021 on Sunnyside Records - the first solo jazz release by a female artist. Stephanie currently splits her time between Louisville, Kentucky and Tucker County, West Virginia.
Text Sunnyside, Label Website 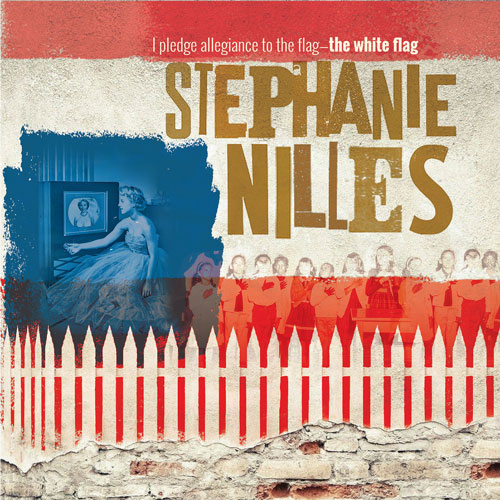 Stephanie Nilles - I Pledge Allegiance To The Flag - The White Flag

I began to experiment with Mingus' music when I started to improvise and write songs in 2007. To me his work was life-affirming: it was devoid of the tortured stuffiness of the world of classical music and the shallow narcissism of pop and rock, and yet it held up (and then some) to the best of both genres in every aesthetic quality—with its wealth of complex forms, unapologetic lyrics and titles, unbridled passion, and abundance of hooks. It was a treasure I felt I'd mined by luck. A rare crossbreed of high art and acapitalist punk.

In May of 2019, my friend Volker Steppat heard me play a transcription of a Charles McPherson solo over Mingus' tune "O.P." I had transcribed it that winter and memorized it as a part of a self-imposed campaign to learn faster stride. But I began to perform it as through-composed because playing it feels like flying (I don't know how else to put it). That track appears in this collection, however unorthodox. Volker asked me if I had more solo arrangements of Mingus' songs, and if I'd be interested in recording a solo album of his work in Bremen, Germany. Terrified and thrilled, I agreed to a recording session that December.

I spent September-December preparing for the session as I would prepare for a recital of sonatas by Beethoven or Schubert—with the obvious exceptions that I wrote all the arrangements and kept ample sections open to improvisation. In the late summer, I worked in an abandoned top-floor apartment in an old coal mining town in West Virginia. I would start early in the mornings and was often accompanied by a chorus of birds who had nested in the roof above. I began to learn some of their songs. Many of them make appearances throughout the record. I tracked these arrangements over the course of a day and a half at the Sendesaal in Bremen—the same venue at which Mingus himself had performed and recorded with longtime collaborator Eric Dolphy on their final tour together in 1964. Tired of white supremacist America, Dolphy had decided to stay on and relocate to Europe after that tour. Two months later, he collapsed in the middle of a gig and was taken to the hospital, where, assuming the Black American jazz musician was high (although he didn't drink or do drugs), medics left him in a corner to dry out. He lapsed into a diabetic coma and died. It's chilling to me that I write these words almost a year after I recorded this collection, many decades after Mingus and Dolphy played that Bremen session—only to come home to eviction and death by medical negligence, and yet months after Breonna Taylor was shot dead in her home blocks from my own—and mere weeks after Quawan Charles was so severely beaten to death that his autopsy photograph closely resembles that of Emmett Till's. Meanwhile, evictions around my country are ramping up, disproportionately targeting black and brown people, in the middle of a pandemic that disproportionately devastates black and brown bodies. There will be no justice for Breonna or Quawan, nor for countless others that look like them, as there was none for Dolphy or Mingus. All of these tracks are single takes, all of them either the first or second take, with the exception of "Fables of Faubus"—which kicked my ass into submission during the session (fitting, I think, given its subject matter) until I decided to split it in half. All songs were written by Mingus except the last, a eulogy by John Coltrane, which reflects on the distress of the preceding often-violent body of work, and then employs "a flight of angels to bring thee to thine eternal rest."

Many of these works are explicitly about the struggle of the Black American experience. I'm a white woman—and I'm well-aware (and learning more each day) of the painful history merging these two profoundly different experiences. When I first heard the rough mixes of this record, I was conflicted about releasing it. It doesn't swing (among other things). But should it? I'm not a jazz pianist—I'm a singer/songwriter trained as a classical pianist. There are some who'd say I'm a fool for attempting to interpret this music and that I shouldn't touch it at all. Perhaps they're right. All things considered, I'm in love with this music. I consider Charles Mingus a beacon in a world gone mad. His music celebrates the joy of living, mourns the pain of grief—and simultaneously harangues injustice.

That it manages such a feat boggles my mind (and, I believe, transcends the construct of genres). I hope to continue to live with this music as both a player and a listener for as long as I'm privileged to do so.