... Originally from Orleans, the Ceccaldi brothers have just created a galaxy or something like it, which is disrupting the cosmos. - Francis Marmande, Le Monde

Théo Ceccaldi plays the violin with a mastery that renews what we thought the instrument was capable of. - Michel Contat, Télérama

The trio of French violinist Théo Ceccaldi with his brother Valentin (cello) and Guillaume Aknine (guitar) presents the new album "Django". "With verve and greedy musicality, they bring frenetic lyricism to powerful communication. They fulfill all the expectations of gypsy jazz, amplify its virtues and update its codes." (France Musique/ Open Jazz).

Named successively French Musician of the Year by Jazz Magazine and then Revelation of the Year by Victoires du Jazz, Théo Ceccaldi has established himself as a unique voice in the new European jazz scene.

He is a co-founder of the bubbling Orléans collective Tricollectif and actively participates in a number of formations, including Loving Suite for Birdy So with Elise Caron, Tribute to Lucienne Boyer with the Grand Orchestre du Tricot, and drummer Sylvain Darrifourcq's trio In Love With. Since 2014, Théo Ceccaldi has been a member of Olivier Benoit's ONJ, the string quartet iXi, Daniel Erdmann's European trio Velvet Revolution and Joëlle Léandre's tentet.

After the operetta Peplum with the punk poet Fantazio, he devotes himself to the explosive FREAKS, the psychedelic jazz-punk, the electro-chamber duo MONTEVAGO with Roberto Negro and the re-creation of the Théo Ceccaldi trio DJANGO.

In 2020 he explores his relationship with vocals and world music with his new creation KUTU, to which he invites two Ethiopian singers, and works on a new project, SONS OF THE BEACH, a handmade electro music. 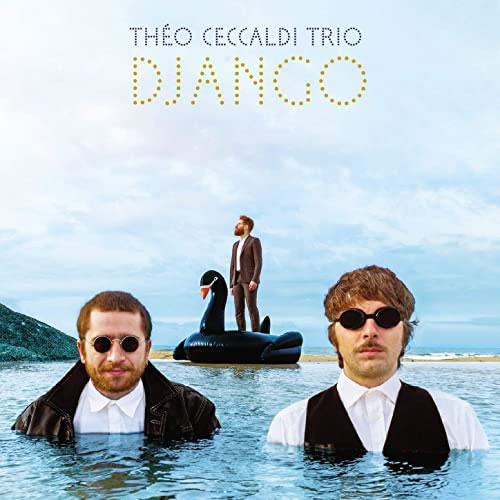 Jazz musicians, especially French ones, cannot form a string trio without the influence of Django Reinhardt on their music. The Théo Ceccaldi Trio, a skillful and dynamic trio, couldn’t avoid it either despite being used to exploring the most radical free improvisation.

They were discovered and supported by the queen of French free music, the great Joëlle Léandre who was seduced by their youthful energy. She even wished to be featured in their second album a few years ago. With Théo Ceccaldi on violin, Valentin, his brother, on cello and Guillaume Aknine on guitar, the trio is no standard trio, combining a continuously renewed rigor in conception with a wild creative freedom, regardless of the repertoire.

The trio works with original compositions “under the influence” and revisited big classics associated with the great gipsy guitarist. With its unorthodox orchestration (amplified guitar, cello…), the ensemble shifted towards a new form of “chamber jazz”, skillfully going from a chaotic lyricism to an expressive energy while using all the expected attributes of gypsy jazz (rhythmic energy, melodic grandiosity) amplifying its virtue and modernizing its codes. The Théo Ceccaldi Trio shows the extent of its mastery and the absolute freedom of its inspiration by opening new perspectives for this repertoire and finding more contemporary ways of expression.