Vincent Glanzmann is a Zurich, Switzerland based sound artist and drummer. As a performer and composer he is involved in a multitude of collaborations with artists from various fields. His playful way of working conceptually makes him an active part within the progressive music and sound art scene. With his distinctive style, sound, creative energy and communicative way of playing, which often includes preparations and alternative techniques, he manages to cooperate with a broad spectrum of artists within contemporary music, visual arts, dance, fashion and literature.

The field of percussion music is one of his special interests. One prominent example of this being his ongoing work with New York drummer Gerry Hemingway. This collaboration is directly related to Glanzmann's electro-acoustical solo work, in which he is primarily interested in cultivating a personal and intimate musical language aswell as investigating compositional and performative ideas. His second solo album Z/Rzw-Shiiiiiii was released in the beginning of 2018.

Other interests of his involve collaborating with contemporary dance. He has written and performed several compositions for contemporary dance companies and balets in germany and switzerland. Four of these in collaboration with the Berlin based choregrapher Georg Reischl.

He obtained a Master of Arts degree in music (performance jazz) at the Lucerne University of Applied Sciences and Arts in 2012 and has operated as a freelancer and independent artist in Europe ever since. In December 2016, he was the artist in residence at the cities jazz club Moods in Zurich and in 2017 the city of Zurich honored him with the cultural award "Werkjahr".

Next to being a Board Member of the Moods Club Zürich he is also engaging himself in a voluntary capacity as a member of the Moods Musicians Council. Apart from that he is also a member of the multi functional organisation Through States of Matter. He has been one of two co-organisers of the concert series Seismogram in Zurich, and functioned as a part of the Unerhört festival's Advisory Board. In these above mentiones contexts, he considers it important to support progressive Swiss musicians. 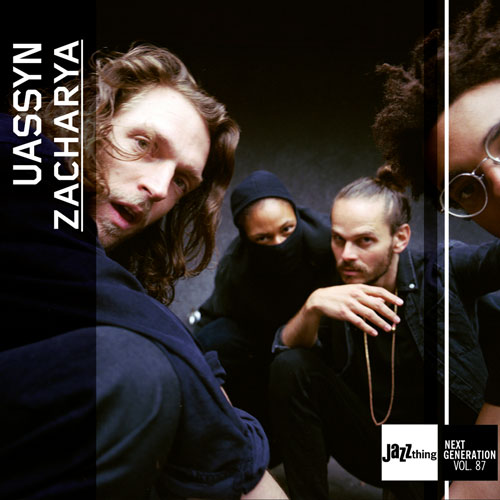 Anything but ordinary – that could be the motto of the young Swiss trio UASSYN. Although the band has a line-up of saxophone, bass and drums, which has a long tradition in jazz history, it sounds anything but traditional. This is due to the unusual patterns that drummer Vincent Glanzmann drums, the steady bass Silvan Jeger plucks and the unique sound Tapiwa Svosve gets out of his alto saxophone.

"The combination of instruments is not that important for us,” Glanzmann said. “We are more defined by our personalities. It's about the overall sound that is generated – something warm and round.”

He hits the nail on his head with this, because although UASSYN clearly belongs to the rather avant-garde side of jazz, they sound anything but abstract or even cerebral. And they have been working on their common sound for a long time; the trio has been together for five years. “We know each other from the Zurich jazz scene,” Glanzmann said. “I played first with Silvan. We had a lot of ideas and waited for the right third person. Then Tapiwa came.”

They refer to their music as skater jazz, which they tried to whip into shape during the first two years in a rehearsal room. “We try to achieve a result with this jazz tonality through other approaches,” Glanzmann explained. “The image of a skater seemed quite fitting to us. If you take a board and go out, make turns and do tricks, it's a way to experience yourself. This is how we try to play our instruments.”

Taking their instruments and going out seemed to be the right next step to Uassyn. In addition to tours at home and abroad – Poland, Lithuania and Germany were already on their tour plan – they discovered a very special performance mode for themselves, which has a lot to do with their hometown Zurich.

“We played in public spaces during our skating sessions,” Glanzmann described this unusual experience. “In Zurich, every square meter seems to belong to someone. Basically we are only allowed to play in a rehearsal room or with the permission of a club. Consequently, we built a space for ourselves for each piece somewhere – perhaps analogous to street art – to occupy the city for us.”

Direct contact with a random audience shaped their music without Uassyn making any compromises. The special situation of the three musicians resulted in them responding precisely to each other and focusing on their peculiar and apparently effortless, forceful sound.
“In retrospect, the procedure of playing at these specific sites gave us the feeling of appropriating them in a very peculiar way,” Glanzmann can remember well. “We played without amplifiers, some alcoholics sang along, and most people watched us from a distance. Those who were there on a bicycle came closest to us, perhaps because they knew they could quickly leave.”

Now Uassyn is taking their long overdue next step and recorded their debut album “Zacharya” for the 87th release of Jazz thing Next Generation. Its music, which resembles an independent language – which is why the band name is also an invented word – is bursting with energy and vitality, but also has plenty of room for tender and ballad-like moments. Its songs seem hypnotic, live from a penetrating beat-bias and take advantage of the freedom that jazz promises as a result. The strangeness that their music radiates continues in the song titles “Dji-ut”, “Mmoosh” and "Kheretem". “Kheretem" is composed of the names of Egyptian gods,” Glanzmann explained. “Otherwise, we try to express the feeling of the piece through the title: like a picture, but using letters instead of colors.”