Yumi Ito (b. 1990) is a Japanese-Polish singer, songwriter, producer and arranger based in Basel, Switzerland.

Her music is an amalgam of jazz, art-pop and neo-classical. Yumi performs extensively live and has shared the stage with artists such as Al Jarreau, Becca Stevens, Kurt Rosenwinkel and Mark Turner.

As a bandleader, side-woman and arranger, Yumi Ito works in jazz, pop, theater and film. In addition to her numerous collaborations, Ito has recorded three albums under her own name: "Intertwined" (2016, Unit Records), "Ypsilon" with Yves Theiler (2017), and "Stardust Crystals" (2020, Unit Records). Ito performs internationally under her name with bassist Kuba Dworak and drummer Iago Fernandez, her eleven-piece Yumi Ito Orchestra, and with Polish guitarist Szymon Mika.

In 2015, Ito graduated with a Bachelor of Arts in Jazz Vocal Performance from the Zurich University of the Arts. In 2017, she received her Master's degree in Jazz Vocal Performance and Composition at the Jazzcampus in Basel. Her teachers were Guillermo Klein, Mark Turner, Jorge Rossy, Larry Grenadier, Lisette Spinnler and Jeff Ballard. In 2017, Ito was selected by Wolfgang Muthspiel to participate in the prestigious Focus Year Band program and was part of the international eight-piece ensemble for a full year. The band recorded the album "After This" (2018, Neuklang) and received weekly training from musicians such as Dave Holland, Avishai Cohen, Django Bates, Steve Swallow and Lionel Loueke. The group performed at Opus Jazz Club Budapest, Porgy and Bess Vienna, Off Beat Festival, etc.

As part of a composition residency, Yumi Ito was invited to East Iceland twice (in August 2018 and June 2019) to work on music for her current projects. She is a prize winner of the Montreux Jazz Vocal Competition (2015) and became a member of the winning band of the festival generation Frauenfeld (summer 2017) under the direction of trombonist and composer Adrian Mears. In 2016, she was invited by Yaron Herman to the 50th Montreux Jazz Festival to perform her own compositions with Ziv Ravitz and Joe Martin.

In the summer of 2013, during a two-month residency in New York, Ito studied with Gretchen Parlato, Bob Stoloff, Jay Clayton and Bobby McFerrin. 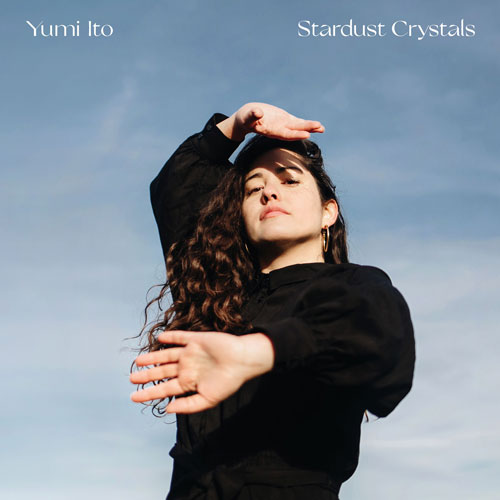 Everything about Yumi Ito's new album "Stardust Crystals" is absolutely audacious! It's a big band record that she wrote and arranged for an 11-piece ensemble. The material crosses neo-classical and art-pop, references progressive electronics, and puts a unique twist on a classic jazz sound. And then there's the choice of themes: Stories about life's ups and downs, each one like an intimate account torn from the pages of a diary.