... The album won the Russian Music Critics Union's Jazz Release of the Year honorable mention, was featured in Europe Jazz Media Chart, provided the trio with the Special Jury Award at the Made in New York Jazz Competition adjudicated by Lenny White, Mike Stern, and Randy Brecker, and secured a busy tour schedule for the band, including Belgium, the Netherlands, Poland, Latvia, Estonia, Switzerland and Japan, as well as multiple destinations all over Russia...

If there is something that can be marked as Russian jazz scene's hot export item in 2018, that is the LRK Trio. Russian names can be difficult to memorize. That is why pianist Evgeny Lebedev, bassist Anton Revnyuk and drummer Ignat Kravtsov call themselves simply LRK Trio. The earlier version of the name, Lebedev / Revnyuk / Kravtsov Trio, although good for domestic Russian market, was just too difficult for international use.

LRK Trio is, strictly speaking, a piano trio — but it's not just another piano trio; the Moscow-based group really is something else. Their first album together, although not yet as LRK Trio, was titled Open Strings (Butman Music Records, 2015) and credited to Lebedev and Revnyuk only — although drummer Kravtsov played on it, as did an array of guest soloists and a string quartet (hence the name).

But it was not until 2017 when their second album, credited to LRK Trio and titled If You Have a Dream, hit big in Europe and elsewhere. Released on Butman Music Records for Russian market and by Norway's Losen Records for worldwide distribution, the album won the Russian Music Critics Union's Jazz Release of the Year honorable mention, was featured in Europe Jazz Media Chart, provided the trio with the Special Jury Award at the Made in New York Jazz Competition adjudicated by Lenny White, Mike Stern, and Randy Brecker, and secured a busy tour schedule for the band, including Belgium, the Netherlands, Poland, Latvia, Estonia, Switzerland and Japan, as well as multiple destinations all over Russia.

Together, be that in the strict trio format, or with added string quartet and / or several featured instrumentalists and singers, LRK never resort to ordinary. The abundance of timbre and colors within the band can puzzle an unprepared listener, not just in sheer volume of instruments used — Lebedev often adds electronic sounds to acoustic grand piano, or even returns to his first instrument, accordion, while Revnyuk is a rare instance of a bass player equally prodigious on acoustic and electric variety of the instrument — but even more so, in rich harmonic textures, ever-shifting grooves and polyrhythmic patterns, and above all, in generous outpour of melodies which instantly remind of the vast legacy of Russian classical and folkloric music, with its centuries of traditions that influence and inspire musicians in classical, jazz, and popular music realms all over the world. LRK Trio are very modern in their sound — the way they play and sound is unmistakably 21st century; but they never let their listener forget that they come from a distinctive, globally influential musical culture of their native country, incorporated in the global music scene and yet distinctly original and recognizable.
Cyril Moshkow, editor, Jazz.Ru Magazine 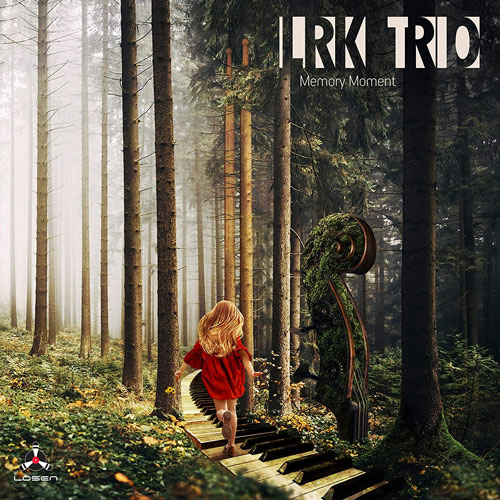 This album evokes all sorts of feelings upon listening to it. Whether it be recalling my personal experiences while traveling through an entire day with the trio on the epic first track Morning: Long Day: Evening: Run or imagining the varied faces and colorful designs of dancing Petrushka, the music on this album from beginning to end readily conjures up rapidly changing scenes as if they were being projected onto a widescreen cinema.

As with LRK recordings of the past, the natural sounds of all instruments are faithfully reproduced and clearly heard against each other. Meanwhile, the introduction of electronic sounds is done tastefully in Memory Moment, an intense composition with a wondrous progressive rock touch. Voices and natural sounds are deftly incorporated into Through The Winter, a composition that arouses courage and a strong will to endure what I can only guess as being an actual, harsh Russian winter.

The positive, inspiring sounds contained throughout this album are sure to make it one that I will choose to listen to over and over again.
Christopher M. Knott, DJ