Izabella Effenberg studied classical music in Poland and Jazz Mallets Bachelor and Master at the Music Academy in Nürnberg.

Izabella is one of very few female Jazz vibrafonists in Europe and the first from Poland. At the moment she plays some very rare instruments such as the glass harp, array mbira, steeldrum, sundrum, waterphone and more..but she is always finding new instruments to add to her list and extend the interesting effects of her music.

During her studies in Poland and Germany she received various scholarships und won several prices in competitions both for perfomance and composition. Her Cd "IZA" was awarded 3rd place at the 38th Annual Jazzstation Awards 2016. Above all she was awarded the cultural prize of the city of Nürnberg in 2018 and prize of the region of Mittelfranken 2020. She also won the virtuell competition Woman in Jazz Next Generation 2020(Halle/Saale).

She was supported by the Goethe Institut for the Summer Session in Denmark for professional musicians 2020 and was awarded the Musikfonds Scholarship 2020.

Her debut CD „Cuéntame“ was recorded by Bavarian Radio and supported by the cultural department of the city of Nuremberg. On this CD she is accompanied by topclass German musicians and the well known singer Efrat Alony from Israel.

In 2014 she founded a annual Vibraphon festival in the Metropolregion Nürnberg in order to introduce her instrument to a wider public. She presents the very rare instrument Array Mbira on her latest CD "Crystal silence - Music for Array Mbira". The array is a hand - crafted modern instrument with a unique harp- or bell - like sound made by Bill Wesley and Patrick Hadley.

Izabella also plays a glass harp (angelic organ, singing glasses) made by Glass Instrument Maker G2. This very interesting instrument made of specially handmade, tuned wine glasses is played by running the fingers around the rim of the glasses.

Izabella was also 8x Polish Shotokan Karate Master and won a silver medal at the European Champianship in 1999. 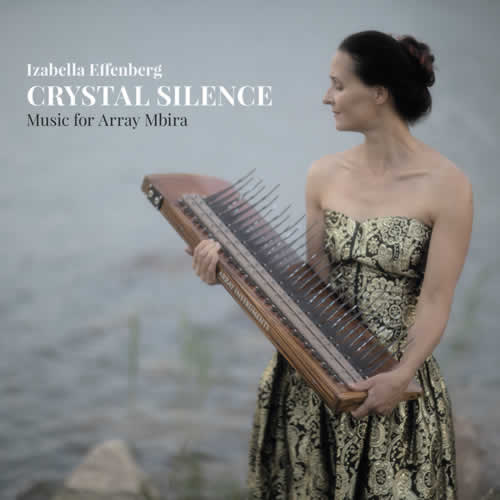 All compositions, except one, are written by Izabella. They are small miniatures in which she searches for her own sound on the mbira. The music combines world music, jazz, classical sounds and more, improvisation and arranged parts.

The Array Mbira is a handmade modern musical instrument with a unique harp or bell sound. It is made in the USA by Bill Wesley and Patrick Hadley in San Diego, California. It is a radical redesign of the African mbira and belongs to the lamellaphone family.