A top-class ensemble, founded by Ruben Giannotti. At the centre is the fragment suite for big band, in which the composer has intensively dealt with changes of perspective in sound production (electronic, instrumental).

Ruben Giannotti, born in 1989, attended the University of the Arts and the Academy of Music "Hanns Eisler" in Berlin until he received his master's degree in 2018. In composition his professors were Maria Baptist and Jörg Mainka, in electronics Eres Holz was his teacher. Theory he was able to study with professors Jürgen Ganzer and Hartmut Fladt. Private studies of the trumpet with Gerard Presencer followed.

The main focus of his musical activities is the trumpet. Initially as a member of the Berlin Youth Jazz Orchestra and various university big bands. Ruben was a founding member of the Maria Baptist Orchestra and this was the start of his professional involvement. In this context also belongs his participation in the Berlin Cool Jazz Project as lead trumpet player and soloist. Primarily active in the Berlin scene, he plays in the Composers Orchestra Berlin and other local big bands and beyond: Fine Arts Big Band, Omniversal Earkestrta and many more. Tours have taken him throughout the German-speaking countries.

As a composer, Ruben Giannotti works at the intersection of new music, jazz and popular music. Writing for these genres, he realizes numerous projects of his own: his ensemble oprheus III, all big band projects in which he also participates as an instrumentalist, the Sächsische Bläserphilharmonie, the Komische Oper Berlin. Currently, Ruben Giannotti is composing themes for solo piano as well as chamber music for various ensembles for the Belarusian pianist Elena Bregman - who lives in Germany. Furthermore, he writes arrangements and compositions for twelve-tets and big bands, which can be heard on his latest CD "fragment" - released by STOA Records.

Ruben Giannotti in the Maria Baptist Orchestra
It can be assumed that Ruben Giannotti was able to acquire a lot of musical experience in the sonorous big band of Berlin pianist Maria Baptist. The music that Ruben brings to sound in his own project seems different from the sound of MB Orchestra, but two features are very similar, cannot be ignored. These are the mature compositions and the refined arrangements. Both are found in these orchestras, both define contemporary big band sound.

Ruben Giannotti in the band of Anna Margolina
But Ruben not only blows the trumpet and flugelhorn, he also strikes the keys of the piano in an amazing way. His pianistic activities were (and hopefully will be again soon) well experienced in the concerts of vocalist Anna Margolina. An excerpt from the May 2019 concert review:
"The 1st surprise up front: at the piano takes a seat Ruben Giannotti, who not only indicates the intention to play, but does it. Surprise in that Ruben Giannotti is known to the author as an accomplished trumpet player who shapes the music of Maria Baptist's Berlin Big Band in the movement and enriches the sound with his excellent solos. Now this trumpeter sits at the piano and plays as a jazz pianist should in his "main profession": classically swinging, without fault, with empathy ... the beating heart of this concert comes from the piano of Ruben Giannotti, who - as the singer explains - wrote all the arrangements. The sound moves in the tension between a piano trio with vocal support and the quartet of a vocalist who uses the help of the piano. Both are present here, and both poles alternate - fairly fairly - in vocal and melodic delivery."

Ruben Giannotti - jazz orchestra
This top-class ensemble was launched in 2019 by Ruben Giannotti. At the center of which is the fragment suite for big band, in which the composer has intensively explored changes of perspective and the relationship between electronic and manual instrumental sound production. The result is an organic mishmash of "classical" big band topoi, beats, samples and generative automata - unfolding in each layer and not unambiguously confined to specific areas.

With its debut album, the ruben giannotti_ jazz orchestra presents the combination of jazz, groove and electronics from a fresh compositional angle: that of a beat producer. This special symbiosis of jazz tradition and electronic music, realized with an outstanding band formation, is placed by composer Ruben Giannotti in the modern big band world in order to bring it to the widest possible audience. Already in his previous projects Ruben Giannotti has turned to be a border crosser between the genres of electronic sounds, beat structures and the avant-garde and now brings his ideas together in a studio album that presents six original compositions and a graceful arrangement of Wayne Shorter'sAna Maria. At times, the color-loving impressionist is evident here, as inruine takes counterpoint to the limits of tonality. Elsewhere (serpent), elements of early and new music radically collide.Vaermeland, in turn, sets an intermediary pole of calm with his folkloric tone. The album contains the unpredictable and, without breaking with tradition, resonates with the listening habits of today - and possibly with those of tomorrow.

Ruben Giannotti explains:
Fragmentary are always the individual components of an aesthetic. This compilation in particular is just as fragmentary in relation to the selection from my Œvrefür Big Band.fragment is thus a set of four snapshots that show the handling of Big Band from my very personal point of view of many years of immersion in and devotion to this (these) special kind(s) of jazz. Subcutaneously underneath the whole selection made above lies the hopefully always clearly recognizable (musical) political issue that artful music is allowed to move and be fun, while possibly vice versa moving music that is fun should be just as artful in its facture. 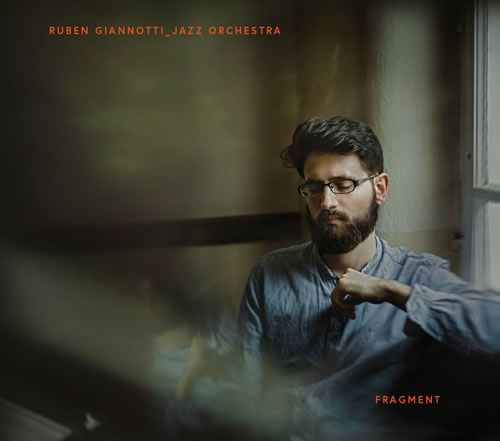 Fragment 1
Rhythmically accentuated, the theme slowly emerges. A straight rocking beat provides the basis for the fulminant winds, which ensnare the theme as insistently as subtly with their interlaced movements, even wrap it up. Sharp wind entries, a continuous beat from drums and bass, and alternations between thematic sections and the solos (alto, trombone) characterize this fragment.

Fragment 2
The 2nd track is even more rhythmically accentuated than its predecessor: a beat that runs through, kept simple. A trumpet solo sounds above it, lyrical and balladic it forms the contrast to the simple rock figure. The piece lives from its contrasts. A voluminous solo of the bass clarinet achieves empathetic warmth, sets musical counterpoints to the tight rhythmic basis. The winds enter this field of tension, balance it harmonically and mediate between the poles of tension. Immensely entertaining.

Fragment 3
The 3rd fragment also uses percussion and bass sparingly. The added winds blow full-bodied into the theme, creating a filigree complexity, while an electric piano tries to fight against it with electric gimmicks. The winds soar into the high registers, setting pointed pinpricks into the action. The trombone solo enlivens the lower frequencies, creates jazzy grounding, provides the necessary emotionality of the whole. Woodwinds and brass cannot leave it alone. They always interfere, jostle between theme and solo, can't get enough of their numerous entries. Every now and then a dark voice speaks up that doesn't want to talk, but only to say something.

Serpent
It starts with a solo of the trumpet. Cautiously other splashes of color are added, it remains in a calm mood, a compact ensemble sound full of tranquility. In contrast, the pianist Maria Baptist strikes the keys, gives rhythm and theme. Now all the other voices want to be part of it, group sound a la big band, slightly oblique and mischievous, collective unfolding of the individual timbres - associations with the bizarre Willem Breuker Kollektief come to mind - same humor, fine irony, same musical esprit. Then the solo of the piano, which confidently intervenes in the action, with Monk's mischievousness in the neck, but more profound, it becomes steadily more oblique .... until the wind instruments bring the crooked musical track back into balance. There's that voice from offstage again....

Ruin
The clarinet starts thematically, drums and bass follow, now more swinging, more drive. The solo of the clarinet acts here as a counterpoint, dazzling dabs, unrestrained, uninhibited. The rest of the orchestra keeps swinging, classic big band sound. The solo of the guitar pushes into these sounds, driving and insisting until the wind instruments set the tone again with their merciless entries, they run out of steam and the piece is allowed to fade out. That's contemporary big band sound!

Vaermeland
Carried upbeat of the band, condensation of all voices. Individual saxophone voices emerge from this dense silence. The soprano takes the solo, starts quietly, restrained, then gets plenty of space and time for its improvisations to unfold. This is occasionally supported by the other wind instruments. Carefully also the drums, yes nothing smash ... a soulful mood spreads in this ballad, in which the solo of the trumpet paints its colors. The soprano still has many ideas in its body, all wanting to get out. So does the whole band, which embellishes this ballad with its voices. Again, the horn. What was good and expensive for the sax solo is right and cheap for the brass. And only the whole orchestra. But the title is allowed to end with soft guitar sounds.

Ana Maria
All the sequences that characterize the previous titles can be found here as well. Theme, brass sections, solo voices - here tenor sax - and everything crisscrossed and from the front, only to the left. The restrained beat of the opening bars comes swinging casually, only to fade into the background again soon after to let the solo voices have their space. A very conducive to the group sound playing of drums and bass. The winds then provide the finale of the title again, condensing the theme, driving it energetically to the top, only to let it gently slip away. In short: Ruben Giannotti's Jazz Orchestra contains everything that characterizes excellent contemporary big band sound.