Her vocal clarity and theatricality are both innovative and mesmerizing, balancing between infantilism and a fully mature psycho-drama.” — Greg Drygala, Hifi Criti

Tamara Lukasheva is considered one of the outstanding voices of German jazz way beyond her generation. Her exceptionally agile power of expression that she has been polishing for about 15 years leaves deep impressions, not only on jazz audiences. Lukasheva’s independent music moves within a field of tension between strong melodies, East-European influences, dynamic improvisation and expressiveness.
Her quartet’s debut album, Patchwork Of Time, was highly praised by media and audiences alike. BR Klassik adjudged it to be “One of the highlights of composer Tamara Lukasheva, who brings her splendid vocal temperament and the complexity of her music into an enthralling flow.” And Jazzthetik wrote: “Tamara’s voice is versatile, vitally alive, full of surprises and technically at the highest level.” In 2014 Lukasheva’s quartet was awarded the Junge Deutsche Jazzpreis Osnabrück [Young German Jazz Prize Osnabruck]. In the following year the band won the 2nd prize at the Keep an Eye Jazz Awards in Amsterdam and in 2017 received the Neue Deutsche Jazz Preis [New German Jazz Prize] in both categories (ensemble and soloist).
The vivid-distinctive air of Lukasheva’s singing and her sometimes subtly playful music are rooted in her personal history. Before moving form Odessa to Cologne in 2010, she celebrated considerable success on stages in her former homeland. Born in 1988 as the daughter of professional musicians (the mother a classical pianist, the father a jazz-saxophonist), she started her career at the age of 16. As a classically trained pianist and as a jazz-singer, she worked with renowned Ukrainian artists such as jazz-legend Yuriy Kuznetcov. She was a soloist in the big band of Odessa, had a duo with the pianist Roksana Smirnova and played at festivals in Kiev, Moscow, Rostov and Sevastopol.
Right upon arriving in Cologne, Lukasheva started playing with her quartet, which has subsisted unchanged in this line-up since. The new album Homebridge mesmerizes with a wide musical range, ingenious ideas and intensity. “I had a specific character in mind for the pieces and therefore notated the compositions more precisely in advance,” Lukasheva describes the development. Beside the intricacy of her voice, the playfulness and the tonal colors of her musicians become more clearly perceptible now. “The new pieces also reflect my different musical influences much more,” Lukasheva states. Among them are childhood memories of musical and pop music from soviet times, of strong melodies and particular phrasing, specially emphasized words and political subtext. Later classical music and folk came into her life and then the extensive studies of jazz.
Lukasheva placed great importance on a close connection of music and lyrics in the songs on Homebridge. The melancholy that wafts around some lines and melodies much less reflects her personal sentiment, but rather the story that it tells. Like in Asja Klimanova’s profound poetry, which Lukasheva set to music in three of her pieces. The contrasty opening piece of the album, Night and the Moon, fascinates with its boosts of energy, offensive vocal upsurges and dynamic twists and turns. Alte Häuser [Old Houses] and Awakening incite with their catchy rhythmic phrasing. The cheerfully bouncing Where Are You Going, Yanichku serves as a stepping-stone for scats and a far-reaching piano solo. Just as this piece, Marisija is also based on a Ukrainian folk song. Powerful ballads like Homebridge or The Moon Is Clear - the latter composed by the late Yuriy Kuznetcov - get under one’s skin with their quiet notes and restrained, sometimes almost whispering vocals.
Apart from her own quartet, Tamara Lukasheva has been working with trumpeter Matthias Schriefl since she arrived in Cologne, and has enhanced the ensembles East Drive and Eurasians Unity as well as the WDR Big Band with her expressive singing. The title of the new album, Homebridge, is not alluding to homesickness, Lukasheva says. In fact, she travels to her old home frequently to visit family and play concerts. Lukasheva rather sees Homebridge as “a bridge between the place where you are and the place where you come from. Home isn’t the beginning or end of the bridge, but the bridge itself is home.”
Deliberately living with two cultures is just as essential to Tamara Lukasheva as the musical diversity that she and her band impressively demonstrate on Homebridge. The Tamara Lukasheva Quartet presents modern European vocal jazz with unmistakably distinct character. 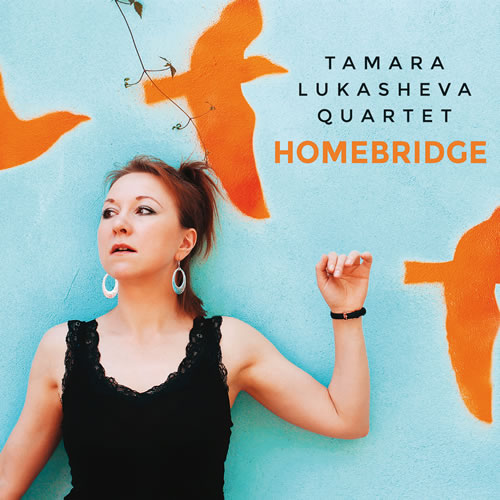 Tamara Lukasheva is regarded beyond her generation as one of the outstanding voices of German jazz. Her unusually agile vocal expressiveness, honed with precision over some 15 years, leaves deep impressions not only on jazz-savvy audiences. Lukasheva's music is independent and variable, moving between strong melodies, Eastern European influences, dynamic improvisation and emphasis.