Nocturnal Animals: How Eckemoff uses sound and arrangements to represent each nocturnal animal is very intriguing. The combination of piano, bass, and both drums and percussion is also unique. - Masayuki Foito, Walker Magazine

Growing up in Moscow, Yelena Eckemoff started composing at the age of four. At 7, she was accepted to the elite Gnessins School for musically gifted children and received her initial professional education there, before embarking on graduate studies at the Moscow State Conservatory. But as Yelena grew into her teens, she realized she had no intention of composing classical pieces. “I was more interested in the Beatles, Pink Floyd, and Mahavishnu Orchestra,” she says.

She began studying jazz in her early twenties, playing mostly evergreen standards. This was at a time when jazz recordings were so hard to come by in Russia, smuggled tapes were in great demand. “When I heard something new I liked, I thought about the ways to implement it into my composing language,” she says. “Almost every day, I wrote a new tune. I was always learning new tricks.”

She had her head turned when she attended the great American pianist Dave Brubeck’s legendary 1987 concert in Moscow, part of a cultural exchange. It was the first jazz performances she had ever been to. She was so impressed that she formed her own band and, she says, “tried to play jazz.” But her songs proved too complicated for her fellow musicians.

In 1991 she and her family immigrated to the United States. As she recounts in her detailed, moving liner notes for Better Than Gold and Silver, her determined efforts to leave Russia, which “felt less and less like home to us,” were marked by pain and sacrifice. It took a while before she had the time or focus to pick up where she had left off with her musical aspirations. But as her children got older, she was able to play and compose tunes that she recorded in a modest studio she put together for herself. She assembled a band with local musicians to performher pieces and began to draw attention.

Eckemoff’s early band-based recordings were by two quartets, one featuring cello and flute and the other saxophone and oboe. People told her that her sound reminded them of the vaunted German label ECM’s albums, which she wasn’t familiar with. But for this determined Russian, who doesn’t settle for less, the level of musicianship in her local band left something to be desired.

She was soon listening to albums by the likes of Bobo Stenson, John Taylor, and Eberhard Weber. “When I heard [bassist] Arild Andersen, his music felt like a homecoming and I dared to imagine playing with him."

Ever pro-active, she sent some of her tunes to another leading Scandinavian bassist, Denmark’s Mads Vinding, who had accompanied expatriated American greats including Hank Jones, Johnny Griffin, Art Farmer, and Kenny Drew. “A fabulous improviser and versatile interpreter” in Eckemoff’s estimation, he recorded his bass parts for her winter-themed trio effort, Cold Sun(2010), in Denmark. Drummer Peter Erskine, whom she sent the resulting piano-bass tracks, recorded his drum parts in Los Angeles. For the seasons-themed sequel, Grass Catching the Wind, she collaborated long-distance with Vinding and Danish drummer Morten Lund.

As pleased as Eckemoff was with the recordings, she knew she had to record her music in the live presence of her bandmates. That dream became a reality when she flew to Los Angeles in 2010 to record the live Flying Steps in the flesh with Erskine and Polish bassist Darek Oleszkiewicz.

Touched by blues, jazz-rock fusion, and free jazz, Eckemoff’s subsequent albums have basked in high concepts. Glass Song (2013), the first of her albums to team Andersen and Erskine (who surprisingly had never previously played together), boasts songs about frost, rain, melting ice, and clouds.

The pianist’s 2014 gem, A Touch of Radiance—dedicated to happiness—features Mark Turner, Joe Locke, George Mraz, and Billy Hart. Andersen and Hart were aboard for Lions (2015), her musical imagining of life in the savanna. Desert (2018), featuring McCandless, Andersen, and Erskine, conjures the mysteries of the Arabian Desert.

Her multilayered, intricately structured music can be a major challenge for her collaborators, especially considering the sheer volume of it they are asked to play. But, she says, “I feel like when I have these guys around, I can do anything.”

In her usual manner, Eckemoff has supervised all stages of the album production, starting with music compositions and arrangements as well as selecting and recruiting musicians. She was very hands-on in the final mixing of the album with the renowned engineerRich Breen. She also painted the idyllic cover art and wrote the liner notes, which disclose in moving detail the fascinating story of how her psalms project came to be.

In the settings Eckemoff created here for the psalms, the vocals represent the word-for-word verses from the King James Bible. As she described in her liner notes, Yelena just wrote down the music she “heard behind the words.” The album has a beautiful, open, natural sound. The songs flow into each other with a combination of delicacy and strength, adding up to a work that’s greater than the sum of its parts.

Better Than Gold and Silver is but the first in a planned series of Eckemoff’s psalm recordings, which she continues to add to apart from what she calls her “avalanche” of other recordings. To say that Russia’s loss is our gain would be to understate her achievement. These are recordings of universal reach and importance, their power of belief not only better than gold and silver, but all material things. 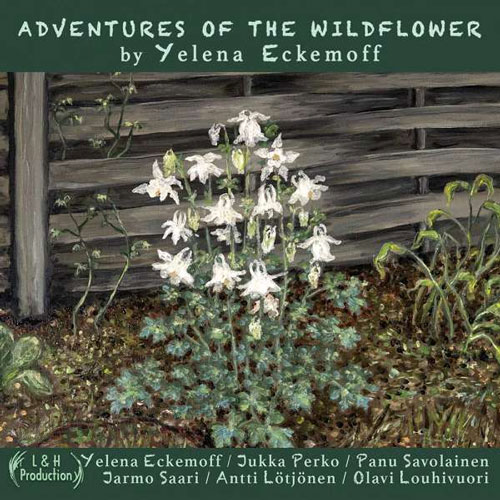 Yelena Eckemoff - Adventures of a Wildflower

Pianist-composer Yelena Eckemoff unfurls her most elaborate and ambitious musical work yet with Adventures of the Wildflower, which her own L&H Production label will release on March 19, 2021. As its title suggests, the double album is the story of a life, from birth to death (and rebirth), of an anthropomorphic columbine flower. Its story is told through the inspired work of Eckemoff and a Finnish ensemble that includes saxophonist Jukka Perko,multi-instrumentalist Jarmo Saari, vibraphonist Panu Savolainen, bassist Antti Lötjönen, and drummer-percussionist Olavi Louhivuori.

Having previously worked with Savolainen, Lötjönen and Louhivuori on her 2017 album, Blooming Tall Phlox (inspired by nature’s smells), she was eager to return to Helsinki to record with them again. That she did in summer of 2019 (before the onset of the pandemic), with the addition of two highly regarded Finns: guitarist Saari and saxophonist Jukka Perko, who took a relay baton from trumpeter Verneri Pohjola.

Long a conceptualist, Eckemoff has previously tended to craft albums of thematically linked but discrete pieces. Adventures of the Wildflower, however, functions as a single narrative. The flower—aptly named Columbine—undertakes a vivid journey, growing from baby to mature plant as she observes from her garden spot the whirl of nature and of life, plant and animal, around her. She even learns to communicate with her garden mates, a real phenomenon that inspired Eckemoff to create the album when she read about it in a magazine.

“I was intrigued to learn that plants communicate with each other through the air, by releasing odorous chemicals, and through the soil, by secreting soluble chemicals,” she says. “Such communal life sparked my imagination. I started to envision how a single plant would feel being part of such an interconnected community and how it would react to its neighbors who lived next to it. Soon I had a kernel of an idea about a wildflower.”

Eckemoff supplements her original music with an 18-part narrative poem (one part for each composition) that tells Columbine’s story. While nuanced, the narrative is built on an earnest simplicity, like a children’s story. The music, on the other hand, is much more complex. The multiple levels of melody in “Home by the Fence” or “Children Playing with Seed Pods” are sumptuous feasts for both the ear and the intellect, while pieces like “Chickens,” “Butterflies,” and “Another Winter” are filled with experimental, even psychedelic, textures.

Credit for these soundscapes must go as well to the musicians who work with Eckemoff. The sounds Saari conjures from his guitars, theremin, and glass harp lend the music a unique palette, augmented by the bold, unconventional playing of Perko, Savolainen, Lötjönen, and Louhivuori.

“They were fearless in approaching my extensive lead sheets,” the pianist affirms. In Adventures of the Wildflowerthat fearlessness has, like Columbine, blossomed into a splendid and very alive specimen of its own.